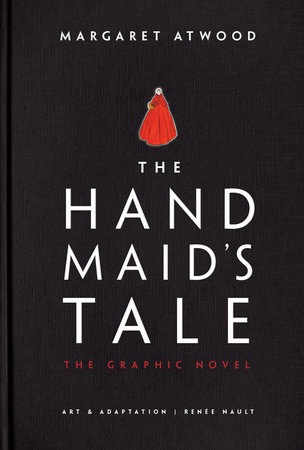 Margaret Atwood’s dystopian classic The Handmaid’s Tale is experiencing a resurgence in popularity, its themes and message resonating with new and familiar audiences alike. Between Atwood’s long awaited sequel, The Testaments, being released and the award-winning television series, it’s likely teachers will be drawn to include this cultural touchstone in their syllabi. The original text has consistently been one of the Top 100 Most Challenged and Banned Books for over twenty years, and now with the release of a critically acclaimed graphic novel adaptation, CBLDF is offering this resource to help teachers and librarians bring this important comic into their classrooms and collections with confidence.

Upon the 2019 release of the graphic novel version of Margaret Atwood’s 1984 classic, the publisher Penguin Random House provided this synopsis:

In Margaret Atwood’s dystopian future, environmental disasters and declining birthrates have led to a Second American Civil War. The result is the rise of the Republic of Gilead, a totalitarian regime that enforces rigid social roles and enslaves the few remaining fertile women. Offred is one of these, a Handmaid bound to produce children for one of Gilead’s commanders. Deprived of her husband, her child, her freedom, and even her own name, Offred clings to her memories and her will to survive.
Provocative, startling, prophetic, The Handmaid’s Tale has long been a global phenomenon. With this beautiful graphic novel adaptation of Margaret Atwood’s modern classic, beautifully realized by artist Renée Nault, the terrifying reality of Gilead has been brought to vivid life like never before.

A worthy adaptation of a legendary and award-winning novel. A tyrannical religious regime has overthrown the U.S. government and reconfigured human roles and identities to severely oppress women, the LGTBQ community, and other marginalized groups. Offred is a handmaid owned by the government for the sole purpose of procreation in a country of widespread infertility. Her existence is a fragile one-a wrong move or a reckless word, and she could be obliterated. Her only escape is her memory, which remains intact and full of scenes from the way her world used to be. She had a career, a husband, and a daughter, and nothing can take those truths from her. Nault’s illustrations are haunting and delicately ethereal. It’s almost guilt inducing to be so captivated by the beauty of her art, so effectively does it depict the horror of Offred’s experiences. At times following the narrative word for word and other times expanding the plot to portray deeper themes of fear, determined resistance, and the complicity of the public, each frame melds with the text until neither can exist without the other. VERDICT A must-read; fans of Atwood, graphic novels, and the TV show adaptation will be particularly invested.-Michael Marie Jacobs, Darlington School, GAα(c) Copyright 2011. Library Journals LLC, a wholly owned subsidiary of Media Source, Inc. No redistribution permitted.

Equal parts gorgeous and horrifying, Nault’s adaptation faithfully follows both the plot and style of Atwood’s 1985 dystopian novel. Narrator Offred lives in Gilead, a United States that is both unrecognizable and too familiar: the government strips women of their freedom in the name of protecting them, discards the old and infirm, and loves fetuses more than the living. Offred says, “Everything Handmaids [women conscripted into rape-based surrogacy] wear is red: the color of blood, which defines us.” Nault’s reds are rich and layered watercolors, rust to flame. In one frame, she draws hanged Handmaid bodies as drooping crimson flowers. Nault’s semiabstracted interpretations of traumatic scenes are stronger than the story’s more pedestrian moments, when it’s hard not to feel the flatness of the pale characters’ expressions. Painting life in Gilead’s toxic, war-torn Colonies, Nault takes great advantage of the graphic form. In Atwood’s text, exile is frightening because it is a void. Here the cancer-eaten jaw of an “unwoman” worker is on full display. Atwood fans may shrug at another incarnation of this classic, but it’s skillfully done and likely to appeal to younger readers; the tale’s relevance and Nault’s talent are undeniable.

In the decades since its 1985 publication, Atwood’s dystopic classic has spawned audio, film, radio, theater, opera, ballet incarnations, and, most recently, the wildly popular television series (which veers significantly from the original, ahem). Given the evergreen veneration for the story, the graphic novel version was inevitable. Canadian artist Nault is credited with the illustrations, while both Nault and Atwood appear on the copyright page for adaptation; with a faithful narrative ensured, Nault spectacularly transforms lines and color into fear, resignation, desperation, and the tiniest glimmers of hope. If graphic adaptations are intended to target young adult audiences, Nault has certainly hit the bull’s-eye.

Handmaid Offred, in her sweeping red robe, must survive her third posting. She’s manipulated by the Commander husband, disdained by his former celebrity wife, and coerced into dangerous, destructive cooperation in exchange for any news about her young daughter from “before.” Whether her work is contained in panels (the orderly march to the shops) or across a double-page spread (the hanging bodies against the Wall—“we’re supposed to look”), Nault draws with precision; most piercing throughout are her affecting use of color (red—“the colour of blood”—and its portentous hues of orange, crimson, rust) and scale (the indistinguishable handmaids trapped in plain sight). She adds a softness when Offred recalls her past, offering less saturated colors for happier memories, and thickened, darker lines for the repetitive nightmares. With Atwood’s announcement of a September 2019 sequel, The Testaments, fans might find Nault’s vision to be an ideal refresher.

Praise for Margaret Atwood and The Handmaid’s Tale

“Arresting . . . Able to convey some things that text—and even a TV show—never could.”
―The New York Post

“A rich, visceral approach to telling the story.”
―Toronto Star

“There is magic in every detail of Ms. Nault’s adaptation, thoughtfulness in each panel, an intentionality about every aspect of it, the costuming, the sets and her interpretation of Gileadean iconography is stark, sometimes shocking and beautifully rendered.”
―Good Men Project

“There’s something about Renee Nault’s art that makes the reader feel both closer to the action and completely, terrifyingly, alone . . . This is the power of graphic novels―the ability to add that extra emotional pull to an already strong story.”
―The Geekiary

“This is great comics. If you agree that the most basic definition of comics is a fluid dance between words and pictures, you will very likely be struck by the beauty of this book . . . What Nault has done here is stunning.”
―Seattle Review of Books

What should I do if The Handmaid’s Tale Graphic Novel is challenged?

Most challenges to comics in libraries come from well-meaning individuals, frequently parents, who find something they believe is objectionable in their local public or school library. These challenges are often difficult and stressful for the library staff who must manage them, but there are resources to help them in the process. Below we’ve identified a number of tips and links to assist libraries to increase the likelihood of keeping challenged comics on the shelves.
1. Make Strong Policies.
Strong selection and challenge review policies are key for protecting access to library materials, including comics. The American Library Association has developed a number of excellent tools to assist school and public libraries in the essential preparation to perform before books are challenged here.
2. Face the Challenge.
What do you do when a comic is challenged? Much of the material in this post can be used to help defend Drama against a challenge. The American Library Association has developed these helpful tools to cope with challenges:

CBLDF can also help by providing assistance with locating review resources, writing letters of support, and facilitating access to experts and resources. Call 888-88-CBLDF (22533) or email info@cbldf.org at the first sign of a First Amendment emergency!

3. Report the Challenge.
Another essential step in protecting access to comics is to report challenges when they occur. By reporting challenges, you help the free expression community gather necessary information about what materials are at risk so better tools can be created to assist. To report a challenge to the Comic Book Legal Defense Fund, call us at 888-88-CBLDF (22533) or email info@cbldf.org. You can also report the challenge to the Kids’ Right to Read Project, a CBLDF-sponsored program from the National Coalition Against Censorship and one of our frequent partners in the fight against censorship. Finally, you can report the challenge to ALA here.