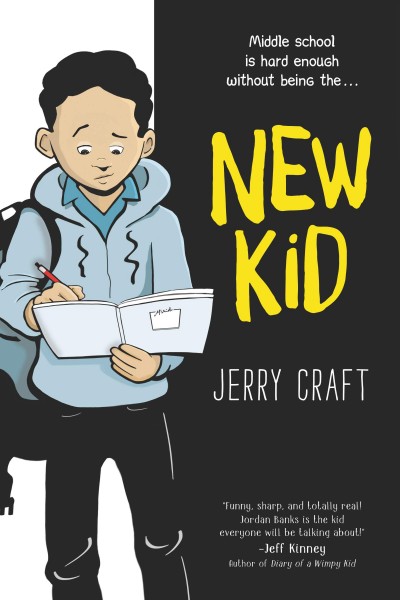 Comics break another barrier with Jerry Craft’s New Kid winning the coveted Newbery Medal for Young Adult Literature. School Library Journal interviewed Craft about being the creator of the first graphic novel to win this honor in the almost century since its inception he highlighted the importance of a comic winning plus another very important victory.

Craft hopes that having the first graphic novel break through and win the Newbery will help “legitimize” the format and convince skeptics of their value, but he also wants this book to show the possible path to success for stories with African American characters who “are not driven by misery.”

Moments after the Newbery Committee called, Craft received a call letting him know New Kid also won the Coretta Scott King award. The CSK Award, already knows comics are amazing, and is awarded annually to Black authors and illustrators of kids and YA lit “that demonstrate an appreciation of African American culture and universal human values” to commemorate the life and work of Dr. Martin Luther King Jr. and his wife Mrs. Coretta Scott King. Craft spoke about why New Kid was an important tale for him to tell,

There are very important books that talk about slavery and civil rights or police brutality or gang life, but I really wanted to add to their narrative by adding a boy who has a mom and a dad, a family who loves him, a support system, neighbors. You don’t have to worry about anything bad happening, anyone meeting an unexpected demise. [It’s] something a kid can just read and relax and be like, ‘Wow I actually feel good reading this. I actually laughed.’ That’s not something I ever had growing up.

Craft attributes this lack of representation in YA books when he was growing up to his disinterest in reading until adulthood, which reinforces what educators and academics say about the importance of diverse books in school curriculum. As well as, how free expression – which dismantles the systems by which some would remove important books like New Kid from schools and libraries – is integral to the improvement of generations of readers and society on a whole.

Craft told the School Library Journal that the response to his win has been overwhelming, “It’s like two families,” he said. “There’s the graphic novel family that has been actually amazing. Then there’s the authors and illustrators of color, that family. The outreach from both of them has been pretty amazing.” 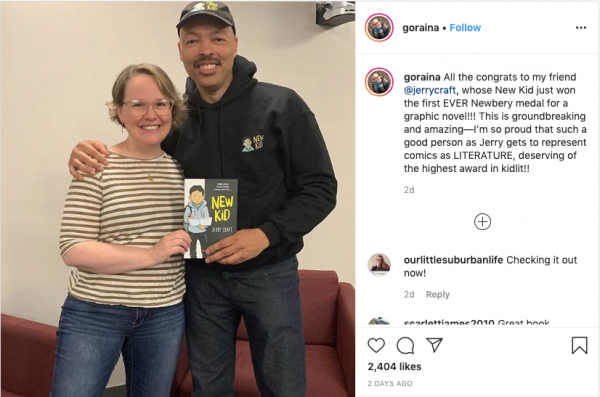 Among the vocal support was best-selling comics creator Raina Telegemeir who texted Craft, posted a picture of them together with a congratulations note on Instagram, but also wrote an op-Ed for Time Magazine.

The Jan. 27 announcement that the prestigious prize for American children’s literature will go to his New Kid, the story of a seventh-grader who doesn’t fit in at his mostly white private school, is a victory for Jerry and for the art form of comics.

That is certainly true. As comics and diverse narratives win these big awards, more teachers and librarians feel comfortable adding them to their collections and curriculum, and it becomes harder to challenge them successfully, as the committees who review tend to look at award wins.

As part of the comics community, CBLDF congratulates Jerry Craft and New Kid on their award wins. We are proud to have you representing this art form on lists of stories that will stand the test of time. Some past Newbery winners include:  Madeleine L’Engle (A Wrinkle in Time), Neil Gaiman (The Graveyard Book), Lois Lowery (The Giver, Number the Stars), Kwame Alexander (The Crossover). Some winners of the Corretta Scott King Award include: John Lewis & Andrew Aydin (March Books One and Three), Walter Dean Myers (Slam, Fallen Angels, Jazz), Jacqueline Woodson (Miracle’s Boys, Brown Girl Dreaming), Jason Reynolds &  (All American Boys), and Toni Morrison (Remember: The Journey to School Integration).