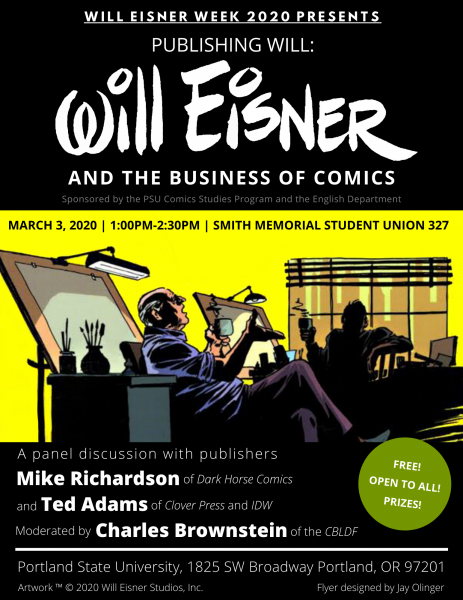 Discussion moderated by Charles Brownstein of the Comic Book Legal Defense Fund
Free and open to the public!

Join two titans of comics publishing for a candid, in depth look behind the scenes of the industry through the lens of Will Eisner’s innovative and influential career!

As part of Will Eisner Week, Comics publishers Mike Richardson and Ted Adams will engage in a conversation on “Publishing Will: Will Eisner & The Business of Comics” on Tuesday, March 3rd at 1 pm in Smith Memorial Student Union 327, Portland State University. The discussion will feature a frank, behind the scenes overview of Will Eisner’s impact on the business of American comics with two superstars of comics publishing: Mike Richardson, founder of Dark Horse Comics, and Ted Adams, co-founder of Clover Press and IDW, and moderated by Charles Brownstein of the Comic Book Legal Defense Fund.

The conversation examines how Will Eisner developed lasting innovations in the business that persist to this day, including the development of creator ownership, the creation of non-fiction and instructional comics, the establishment of the creative bullpen assembly line process, and the establishment of the graphic novelist career path. Every creator working in modern comics engages in practices Eisner helped develop. This program examines the man, his innovations, and the lessons they offer to modern creators, students, and educators.
The panel will conclude with personal reminiscences about the experience of publishing with Eisner and a look ahead to Eisner’s legacy in comics publishing.