April, as Sexual Assault Awareness month, offers a chance to explore an important addition to the comics world, Speak: The Graphic Novel, by Laurie Halse Anderson and illustrated by Emily Carroll (Farrar, Straus and Giroux, 2018). We’ll look at its themes, merits, causes for concern, opportunities for classroom discussion and activities, and additional resources available to support this text. 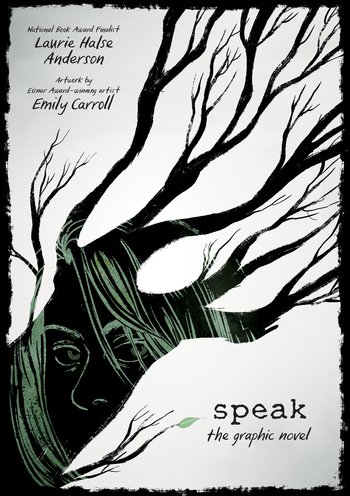 When Speak, by Laurie Halse Anderson, was released as a novel in 1999, its frank prose and relatable narrator resonated immediately. Teachers, librarians, and parents alike watched young people, especially young women, tear through it and then pass it right along to friends they thought also needed to read Speak.  Speak would go on to become a National Book Award Finalist, an American Library Association Best Book for Young Adults, and a Golden Kite Award winner, among many other honors over the years since its release. The book’s power with its audience hasn’t faded; nor have the objections to its direct discussion of sexual assault.

To call Emily Carroll’s visual adaptation of Speak ‘powerful’ would be a staggering understatement. Carroll’s use of negative space, nonstandard panel arrangement, inner monologue, and the flashback story arc central to the original novel collaborate to absorb the reader into Melinda’s battle to find her voice and her place as a high school freshman trying to recover from a sexual assault the previous summer. Speak: The Graphic Novel offers a broad range of classroom opportunities for thematic discussion, close study of comics as a narrative medium, interdisciplinary research, and more.

This adaptation has already garnered a number of honors. Speak: The Graphic Novel is a School Library Journal Best Book of 2018, a 2019 selection as an Amelia Bloomer Best Feminist Book for Young Readers, and a nominee for both the Eisner and the Edgar Allen Poe Awards, among others. The publisher’s recommended age range for this book is 12-18.

Speak: The Graphic Novel follows the format of the original novel very closely: the book as a whole is divided into the four marking periods of the main character’s freshman year of high school, and those sections are subdivided into short vignettes with titles ranging from literal (“The Marthas”) to ironic and sarcastic (“Our Teachers Are the BEST!” and “Giving Thanks”).

Melinda is an outcast at her new high school; whispers and hostility follow her as soon as she enters the building. She learns quickly that “It is easier not to say anything. Shut your trap, button your lip, zip it.” This introduces a main conflict of the novel: Melinda’s fight to find her voice. She is intrigued, but also a little overwhelmed, by her art class, in which the teacher assigns a subject theme for the year — Melinda gets trees as her theme — and tells his students, “Welcome to the only class that will teach you how to survive.”

Melinda continues to experience targeted bullying, beyond what even the most oblivious adult could excuse as ‘normal’: she is tripped, shoved, mocked, and excluded at every turn, including by the girls who were her closest friends in elementary school the year before. Melinda’s only company is a new student named Heather, who desperately tries to fit in, make friends, and join activities. Melinda is exhausted enough by the mere act of survival. As a result, she rarely does any schoolwork. To avoid bullying and schoolwork, she furnishes a janitor’s closet as a hiding spot.

We see the first indications of self-harm in this section, as Melinda bites her lips until they are bloody and ragged. We learn that Melinda is a target because she called the police about a party that summer, leading to arrests for some in attendance. Melinda alludes to more having happened, but feels she can’t tell anyone. The section ends with Melinda encountering a male student she refers to as “It” who attends Merryweather and clearly terrifies her. 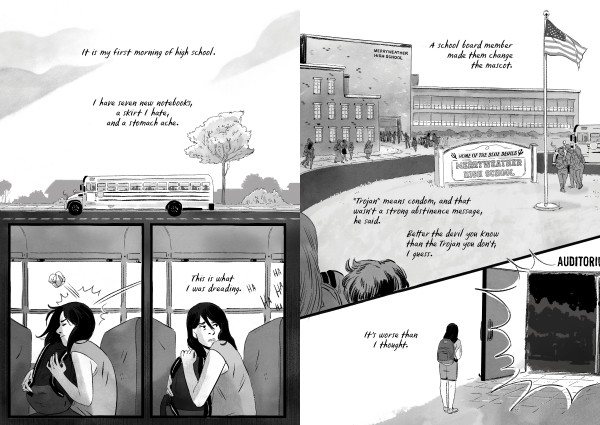 Melinda is incrementally shutting down, spending more time in her closet at school and feeling increasingly distant from Heather, her parents, and her classes. At home, Thanksgiving goes disastrously. Melinda’s parents descend quickly into arguing, and Melinda is overlooked. While the turkey ends up inedible, Melinda makes some inspired art out of its wishbone and some dismantled doll parts.

By Christmas, Melinda is sure she’s invisible to everyone, but her parents give her art supplies as gifts because they noticed how much she’s been drawing. Melinda wishes she “could tell them what happened,” but ultimately feels she can’t.

As unhinged as he might occasionally seem, Mr. Freeman and the space he creates in his art class continue to offer Melinda reprieve and a sense of safety. She is inspired by his resistance to school authorities, too, much like her classmate David’s protests against their bigoted history teacher. A frog dissection in biology class sends Melinda back to that night at the party, and she passes out. Soon after, we see that Melinda has been cutting herself and thinking about suicide, but she still feels unable to ask for help. She has two run-ins with the young man she has called “It,” whose real name is Andy Evans. He bullies Melinda, too, but more intimately, and his presence sickens Melinda. Her grades have dropped further, and her parents are enraged at this point. 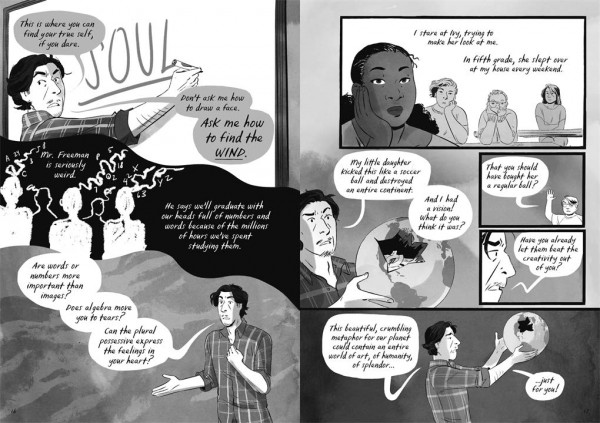 Melinda sees more reasons not to speak up — to classmates, at home; even art class feels less welcoming, as her teacher continues his fight against the school board. To make matters worse, Heather breaks off her friendship with Melinda, now that she has finally found a clique. Heather blames Melinda’s depression, and Melinda realizes that her half-hearted friendship with Heather was the only social connection she had.

A meeting at school, in which Melinda’s parents argue and school officials offer little help, leaves her feeling even more alone and unheard. A chance conversation soon after with Mr. Freeman helps, though. He tells her, “When people don’t express themselves, they die one piece at a time. It’s the saddest thing I know.”

This section ends with Melinda sitting outside in the snow and remembering in detail what happened at the party last summer. She recounts drinking her first few beers, wandering outside, and flirting with a boy. They kiss, and she’s excited for what feels like a scene out of a high school romance, but things grow increasingly aggressive and frightening, and he doesn’t listen to her when she indicates she doesn’t want this. He holds her down, covers her mouth, and rapes her. She wanders back into the party and calls the police in a traumatized daze. People at the party realize what she has done, but they have no idea what has just happened to her. 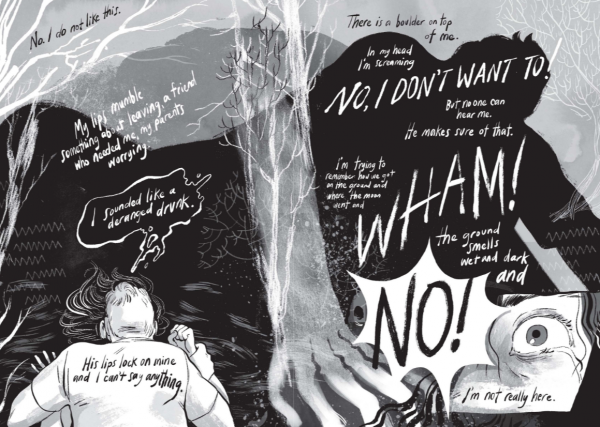 Home sick with a fever, Melinda finally acknowledges that she was raped.

Melinda panics when she realizes her former best friend, Rachel, is now dating Andy Evans. Melinda tries telling Rachel, what Andy Evans did to her, but Rachel refuses to believe her and presumably tells Andy. After an encouraging conversation with another former friend, Melinda writes a warning about Andy Evans on the bathroom wall at school.

In one of the book’s last scenes, Melinda finds herself trapped in her closet hiding place with Andy after he follows her there. He attacks her, blaming her for his increasing notoriety among classmates as a rapist. Melinda fights back this time; she screams loudly while defending herself to the extent of holding a sharp object to his neck, just as others hear what is happening and start pounding on the door to help her.

The book concludes with Melinda realizing that her rape did not define or end her, and she will continue to grow, emerge, and speak. 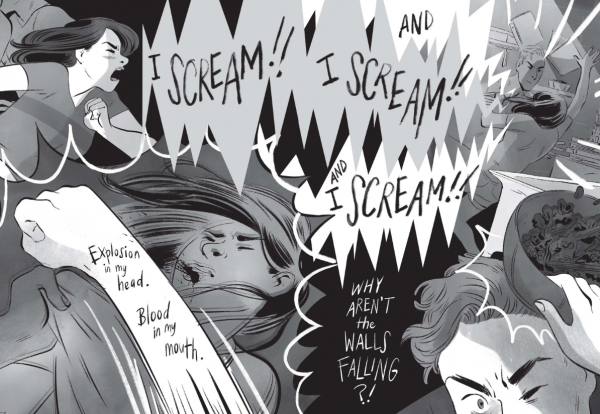 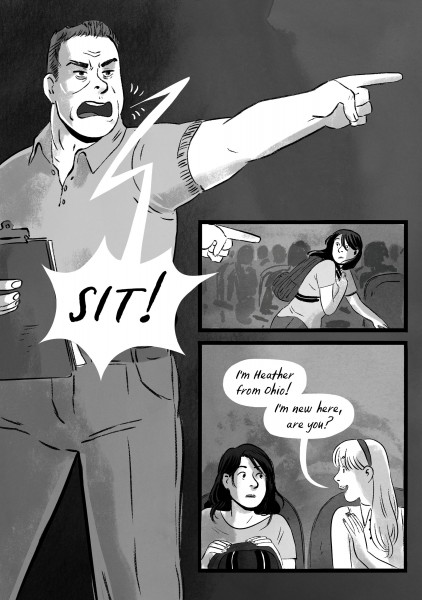 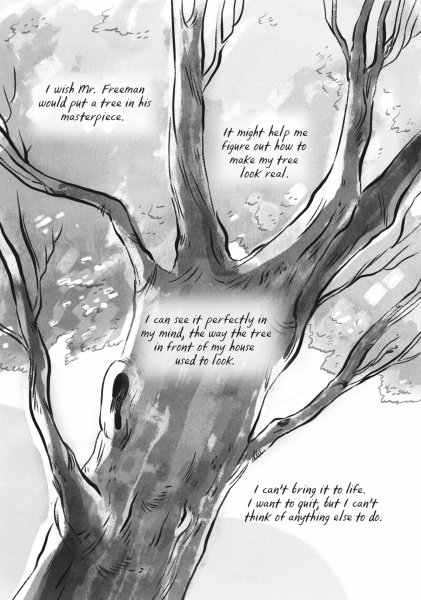 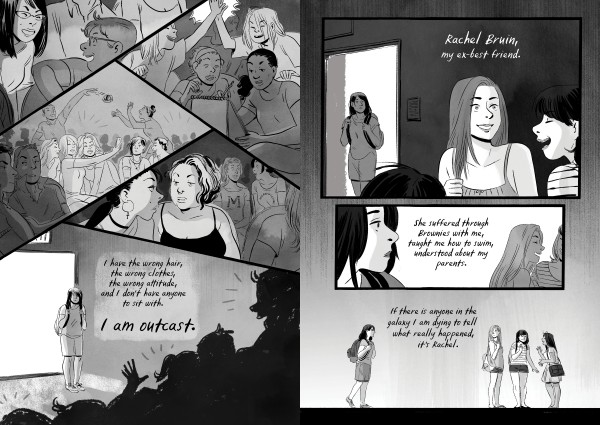 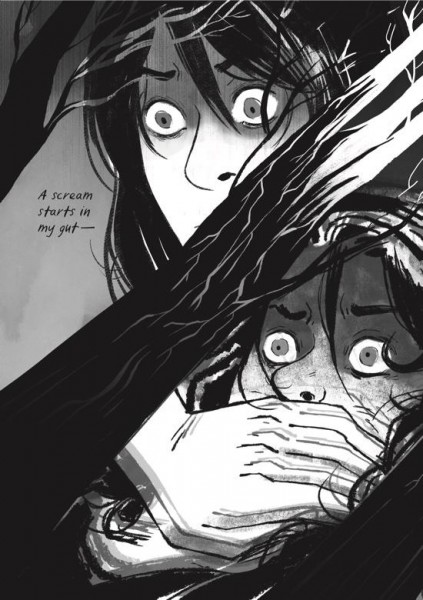 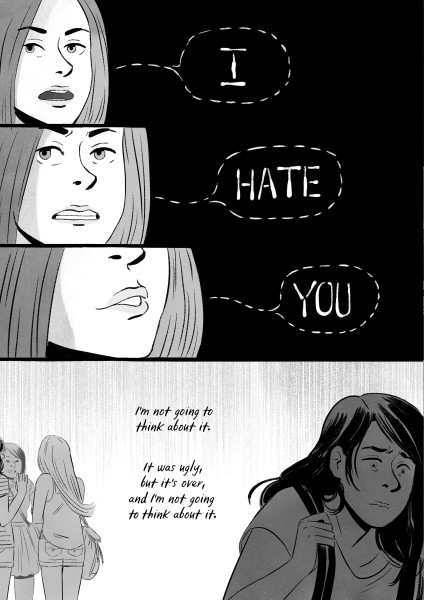