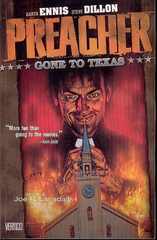 Signed by CBLDF supporter Garth Ennis! One of the most celebrated and challenged comics titles of the late 1990s, PREACHER is a modern American epic of life, death, love and redemption also packed with sex, booze, blood and bullets – not to mention angels, demons, God, vampires and deviants of all stripes.

At first glance, the Reverend Jesse Custer doesn’t look like anyone special-just another small-town minister slowly losing his flock and his faith. But he’s about to come face-to-face with proof that God does indeed exist. Merging with a bizarre spiritual force called Genesis, Jesse now possesses the power of “the Word,” an ability to make people do whatever he utters. He begins a violent and riotous journey across the country in search of answers from the elusive deity. Proceeds from this signed edition benefit the Comic Book Legal Defense Fund!