Imagine traveling to another country and having your comic books and electronic devices seized. Then, you’re arrested because of the books you read. This may seem like a horror story, but for one comics reader, it’s come true.

The total legal costs of this case exceeded $75,000. After taking the case last summer, the Comic Book Legal Defense Fund contributed $40,000 to the defense, and the Comic Legends Legal Defense Fund contributed $11,000. The CBLDF also participated in shaping the defense, including recruiting expert testimony for the trial. The organization is currently seeking funds to help pay off the $24,000 debt Matheson incurred as a result of his case, and to create new tools to prevent future cases. To make a contribution to these important efforts, please visit www.cbldf.org.

After a search of his laptop in 2010, Matheson was wrongfully accused of possessing and importing child pornography because of constitutionally protected comic book images on that device. He was subjected to abusive treatment by police and a disruption in his life that included a two-year period during which he was unable to use computers or the internet outside of his job, severely limiting opportunities to advance his employment and education. Mr. Matheson has agreed to plead to a non-criminal code regulatory offense under the Customs Act of Canada. As a result of the agreement, Matheson will not stand trial. The defense of this case was waged by Michael Edelson and Solomon Friedman of Edelson Clifford D’Angelo LLP. The full Notices of Application detailing Edelson’s defense and outlining the outrageous and unlawful treatment Matheson endured are available here: Charter Notice and Jan 15 12 – Matheson Charter Notice.

Speaking out for the first time, Matheson says, “I’m glad to finally put this awful ordeal behind me. Ever since the beginning I knew I had committed no crime, so I was never willing to accept a plea to any criminal charge. The entire legal process is very traumatizing, and the overzealous bail conditions imposed on me were very difficult to endure. Although my defense was extremely strong, all trials are inherently risky and I value my life too much to risk a potential minimum mandatory sentence. I am very grateful for the spectacular work Michael Edelson and his team put into my case, and to all the generous people who supported me and contributed to my defense. I was able to stand up to the very last day and fight for something I believe in.” Matheson has also written a personal statement about his case that appears on www.cbldf.org.

Edelson, who managed the defense says, “The client, and my firm, are grateful to the members of CBLDF and CLLDF for their invaluable financial and moral support with respect to this case, which was of such critical importance to the client, given the very positive outcome we were able to achieve in an area of the law where, here in Canada, the Crown very rarely exercises its discretion to withdraw charges of this nature. The client will have no criminal record, his name will not appear on the Sex Offender Registry in Canada, or elsewhere.”

The Notices of Application available on CBLDF.org detail for the first time the extreme mistreatment Mr. Matheson suffered at the hands of Canadian authorities. He had his right to counsel and Vienna Convention consular rights violated when he was detained without being properly informed of the reason for detention. He was not granted access to counsel, or to the American Embassy. The Application asserts that Customs officers acted as agents for police and conducted an illegal search of his property. Matheson was also the subject of cruel and unusual punishment, including being denied food and blankets. Matheson was even told by police transporting him to prison that “if you get raped in here, it doesn’t count!” The defense detailed these and other abuses and outlined that the comics at issue are constitutionally protected in the United States, the client’s home country. The comics possess artistic merit and are widely available in Canada, Japan and the United States.

Although the outcome of this case is ultimately positive, comic book readers should be aware that there are still dangers for traveling with comics in Canada. Edelson says, “Aside from the very positive outcome to this story, your members should be cautioned concerning the search and seizure regime here in Canada exercised by the Canadian Border Services Agency. Moreover, they should also be aware that although anime and manga is legal in many areas of the United States and Japan, etc., to possess and utilize, the Canadian authorities may take a different view if this material is found on any laptops or mobile devices when you enter the country. Many of the issues that arise in similar circumstances are thoroughly addressed in our comprehensive Notice of Application.”

“This is a good outcome, and we’re glad we were able to contribute to it,” CBLDF Executive Director Charles Brownstein said. “While one always wants to be able to change the rules in court, those opportunities are rare, and in this case, the defense’s extraordinary effort in persuading the Crown to drop criminal charges is a very positive conclusion. We are now focusing our efforts on raising money to pay off Ryan’s legal debt. We are also working with Ryan and experts in the manga community to create educational tools to help prevent others from needing to go through anything like this themselves. We hope that people will donate to the CBLDF to help us achieve these goals quickly.”

Comic Legends Legal Defense Fund board member Leonard Wong said, “We’re glad this is over for Ryan and want to thank him and his attorneys for their willingness to stand up to our government in this matter. We’re also pleased that the Comic Book Legal Defense Fund were able to assist the defense financially and substantively, and are creating new tools to help prevent these kinds of cases in the future. Unfortunately, this could easily happen again, so we continue our stride to establish the CLLDF as a more active ongoing concern. Our immediate focus will now shift towards raising funds and preparing for any future attacks on comics in Canada.”

Please visit www.cbldf.org today to make a donation in support of paying off Ryan’s legal defense and creating new tools to combat abuses like this from happening in the future. You can also support this effort by becoming a member of the CBLDF. Every contribution helps CBLDF get Ryan back on his feet, and furthers our efforts to protect the First Amendment rights of comics and manga.

About CLLDF
The Comic Legends Legal Defense Fund was founded in 1987 to raise money for the defense of a Calgary, Alberta comic shop whose owners were charged with selling obscene materials. The CLLDF has since been maintained on an ad hoc basis to provide financial relief for Canadian comics retailers, publishers, professionals, or readers whose right to free speech has been infringed by civil authorities. Largely dormant since the early 1990s, the CLLDF is reforming to provide support for this case, and reorganizing to ensure that help will be readily available for future cases involving Canadian citizens or authorities. To help the CLLDF in this mission, please go to www.clldf.ca. 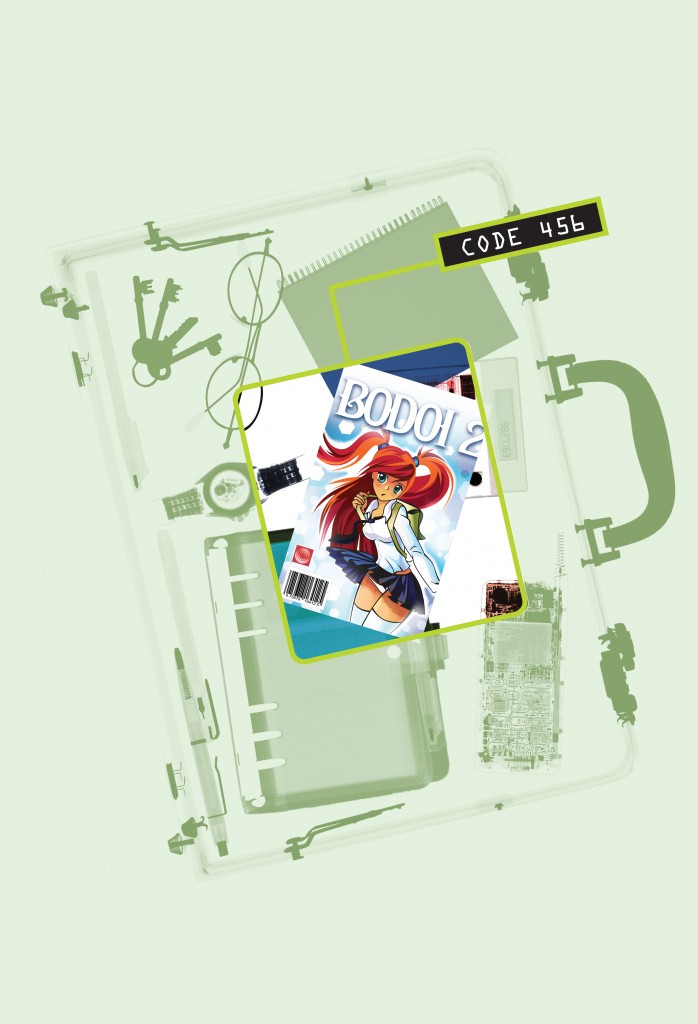 Right now an American citizen — we’ll call him Brandon, although that’s not his real name — is facing a minimum sentence of year in a Canadian prison and being forced to register as a sex offender. Just for having comics on his laptop. This incident is the most serious in a trend the CBLDF has been tracking involving the search and seizure of the print and electronic comic books carried by travelers crossing borders. Please help us fight this case and protect comics by making a tax deductible contribution today.

In 2010, Brandon X, an American citizen, computer programmer, and comic book enthusiast in his mid-twenties was flying from his home in the United States to Canada to visit a friend. Upon arrival at Canadian Customs a customs officer conducted a search of Brandon and his personal belongings, including his laptop, iPad, and iPhone. The customs officer discovered manga on the laptop and considered it to be child pornography. (Brandon’s real name is being withheld on the request of counsel for reasons relating to legal strategy.)

The images at issue are all comics in the manga style. No photographic evidence of criminal behavior is at issue. Nevertheless, a warrant was issued and the laptop was turned over to police. Now Brandon has been charged with both the possession and importation of “child pornography” for having comics on his computer. If convicted at trial, he faces a minimum of one year in prison. This case could have far reaching implications for readers of comic books and manga in North America, who increasingly read and experience comics on their computers.

The CBLDF has agreed to assist in the case by contributing funds towards the defense, which it has been estimated will cost $150,000 CDN. The CBLDF will also provide access to experts and assistance on legal strategy. The CBLDF’s efforts are joined by the recently re-formed Comic Legends Legal Defense Fund, a Canadian organization that will contribute to the fundraising effort.

This isn’t the only case of comics being targeted by customs officials. Last spring cartoonists Tom Neely and Dylan Williams were on the way to a convention when they were stopped at the border and art comics in their possession were seized. In fact, Canada Customs routinely seizes comics of all kinds, as you can see here. If you or someone you know is traveling internationally, please read our Advisory on traveling with comics before getting on the plane.

Anyone who crosses international borders with print or electronic comic books is at risk. Please help the CBLDF fight this disturbing trend. You can help by spreading the word, letting us know of other incidents, and, most importantly, making a tax deductible contribution today. Together, we can make a difference.

Make A Donation — Defending cases like this one costs a lot of money.  If you believe that being arrested for reading comics and manga is unjust, please make a donation to the CBLDF today. Sign up for membership or make a donation in any amount. Every dollar helps us raise the funds that will help pay for this case and to create resources to help prevent others like it. Donate now!

Spread the Word — Let your friends know about this important issue by spreading the word.  The more people aware of this case and the risks facing people traveling with comics and manga, the more likely we’ll be able prevent the next case before it starts.

Tell Us Your Story — Have you or someone you know experienced a search or seizure at any border because of comics in your possession?  Tell the CBLDF!  Send us and email, and tell us your story.  The more we know, the better able we are to help.