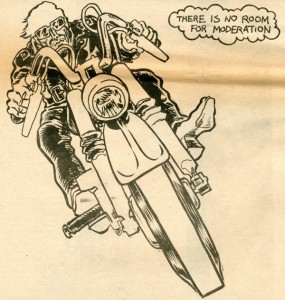 It is with tremendous sadness that we mark the passing of Spain Rodriguez, the pioneering underground cartoonist who expanded the boundaries of comics and who was, as a member of the Zap Comix collective, one of the first cartoonists in the United States to make work deemed obscene in U.S. courts. Rodriguez passed away at his home in San Francisco this week at the age of 72.

Spain was born Manuel Rodriguez in Buffalo, New York, in 1940. He first rose to comics prominence in the late 1960s as a contributor to the NYC tabloid East Village Other, where he introduced Trashman, his most iconic character. In 1968 Spain published the comics tabloid Zodiac Mindwarp, a forerunner of Gothic Blimp Works, the tabloid initially edited by Vaughan Bode and then by Kim Deitch that was the standard bearer of underground comix in New York City. Rodriguez moved to San Francisco in 1969, where he struck up a friendship with R. Crumb and began contributing to the iconic title Zap. Through the 1970s, he was a prolific contributor to a wide range of underground titles, and in the 1980s and 1990s, he explored a diverse range of artistic activity including murals, illustration, set design, and even early web comics. In the past decade, Spain published the memoir Cruisin’ With The Hound, as well as a biography of Che Guevara.

Spain’s comics stood apart from any that preceded them by giving voice to a point of view that advocated for revolutionary social change, developed from a knowing position of personal political, ethnic, and sexual experience. In Spain’s hands, the comics medium transcended escapist aesthetics and became genuinely subversive. Although the influence of EC horror and crime strips was immediately visible in Spain’s brushwork when he drew sex and violence, it was also apparent that he was familiar with the real thing. His comics fit in the continuum of noir expressions, and his works shares the sublime muscularity of Wally Wood before him and Frank Miller after him. Unlike those men, Spain’s work persuasively conveyed the often terrifying reality of violence. While Spain drew criticism for his often shocking work, the underlying motivation to use comics to effect change was always present. Patrick Rozenkranz best describes it in his obituary at TCJ.com:

Spain Rodriguez brought a unique perspective to comic art – a hard-edged outlaw’s attitude coupled with a voluptuous sensuality that also espoused class struggle and a universal quest for human dignity. His characters were die-hard individuals who ceaselessly fought the oppressor, powerful women who demanded respect – by force if necessary, and many of the real people who inhabited his life.

Spain contributed the story “Mara, Mistress of the Void” to Zap #4, the first comic book to be found legally obscene in the 1970 case People v. Kirkpatrick. After the establishment of the Comic Book Legal Defense Fund in 1986, Spain was a frequent contributor to our live art events in California and an exceptionally generous presence to the fellow cartoonists who joined him at the art jam table.

Our most sincere condolences go out to Spain’s family and friends who survive him, as well as our genuine gratitude for his work, his example, and his generosity of spirit. He was a uniquely talented man, and he’ll be deeply missed.