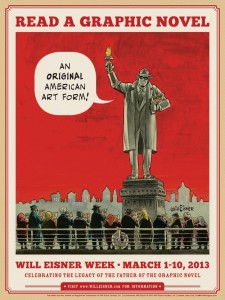 Each year, the week of March 6 brings us Will Eisner Week, “an annual celebration promoting graphic novels, literacy, free speech awareness, and the legacy of Will Eisner,” the father of the graphic novel. Will Eisner Week kicks off this Friday and runs through March 10, with events including lectures, convention panels, sketch nights, public read-outs and more. Held in association with CBLDF, the Minneapolis College of Art and Design, and SCAD, the theme of this year’s celebration is “Read A Graphic Novel.”

The official press release from the Will and Ann Eisner Foundation:

The Will and Ann Eisner Family Foundation is proud to announce Will Eisner Week 2013, a ten-day series of events in more than a dozen cities nationwide that celebrates graphic novels, free speech awareness, and the career and legacy of Will Eisner, one of the most innovative figures in the history of comics and graphic novels.

Will Eisner Week’s theme this year is, “Read a Graphic Novel,” which will be the underlying message of all the events. Cities holding celebrations include New York, Los Angeles, San Francisco, Boston, Seattle, and Minneapolis.

Will Eisner Week 2013 has added significance, as it marks 35 years since the 1978 publication of Eisner’s groundbreaking graphic novel, “A Contract With God.”

“This year, we will be having Will Eisner Week celebrations in more places than ever before,” said Will Eisner Week Organizing Committee Chair Danny Fingeroth. “The people doing the events are planning some amazing happenings that will spread the word about how cool graphic novels are, and that celebrate Will Eisner’s astonishing body of work done over a career that spanned seven decades.”

Will Eisner Week 2013 events include:

March 1-15, SAVANNAH, GA: Savannah College of Art and Design will hold several events run by Professor David Duncan, including a March 2 screening of “Will Eisner: Portrait of a Sequential Artist” and various Eisner-themed art sessions.

March 3-10, PITTSBURGH, PA: Various events at the Toonseum, including a screening of the documentary “Will Eisner: Portrait of a Sequential Artist” by Andrew & Jon Cooke on March 6.

March 4-8, ARKADELPHIA, AR: The Comics Arts Club of Henderson State University, under the direction of Professor Randy Duncan, will study Eisner’s work in the context of Immigrant Experience Focus Week.

March 7, 7:00-9:00 PM, SAN FRANCISCO, CA: The Cartoon Art Museum. An Evening With Mario Hernandez, including a discussion of Eisner’s influence.

March 7, 7:00-9:30 PM, BOSTON, MA: Tufts University. Screening of “Will Eisner: Portrait of a Sequential Artist,” followed by a panel discussion including A. David Lewis, Chuck Henebry, and Stephen Weiner.

March 10, 1:00-4:00 PM, MINNEAPOLIS, MN: Minneapolis College of Art and Design hosts a Graphic Novel Read-In, featuring a screening of “Will Eisner: Portrait of a Sequential Artist.”

Celebrations are also being planned for Amherst, MA and Washington, DC. Check www.willeisnerweek.com for updates on all events.

Public read-outs are being organized around the country. Visit the Will Eisner Week website to find a read out near you!

← Support CBLDF in Portland This Weekend!
Cuban Cartoonists: “Of course there is censorship.” →