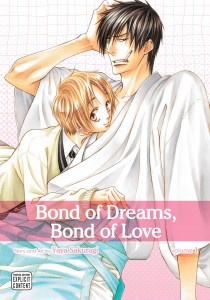 Canadian manga-lovers website Kuriousity posted a story this week about an online retailer that no longer sells Bond of Dreams, Bonds of Love, a yaoi (boy’s love) manga from SuBLime Manga, to Canadian residents.

Lissa Patillo with Kuriousity writes that RightStuf.com posted the following warning on it’s website with regard to Bond of Dreams:

Note: This item is banned in Canada, and will be seized by Customs if ordered.

In the series, a teenage boy aggressively pursues his older male neighbor. Patillo could not find the note on other yaoi books available from RightStuf, so she “assume[s] it’s a note made based on a particular incident.” Patillo further notes that she received the third volume of the series from RightStuf previously without problem:

Interestingly, I actually received volume three of this series from RightStuf just a couple weeks ago and didn’t have any issues. Then again, being buried among many other items certainly helped. The requirement to buy $250+ worth of material to get the free Canadian shipping from RightStuf ups the chance that any supposedly-risky material like this can glide through in similar fashion. Of course, this depends on if RightStuf will actually choose to deny the ordering of these books from Canadians or leave it to the buyers’ own risk.

In an update to the original article, Patillo notes that RightStuf changed the wording of their note, indicating that they likely would no longer ship to Canadian residents. From RightStuf:

Note: We cannot ship this item to Canadian addresses, and it likely will be seized by Customs if ordered.

A look at the list of books that have been previously seized by Canada Customs shows that seizures are inconsistent at best, so it appears that RightStuf may be erring on the side of caution in ceasing shipment of Bond of Dreams to Canada.

Unfortunately, seizures at the Canadian border are not uncommon. Most recently, manga fan Ryan Matheson was accused of possessing and importing child pornography for crossing the Canadian border with manga images on his computer. CBLDF came to Matheson’s aid, and eventually the charges were dismissed, but not before incurring $75,000 in legal expenses.

← Perks of Being a Wallflower Pulled from Illinois Junior High School
CBLDF Heads to Big Wow Comicfest This Weekend! →