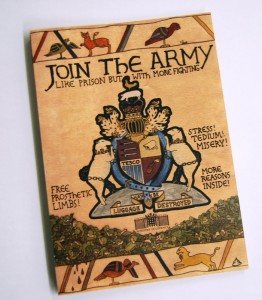 Across the Atlantic Ocean in the United Kingdom, Darren Cullen is currently fighting for his freedom of speech while he struggles to get his new comic book, (Don’t) Join the Army to the printers. The comic is a satirical depiction of the British Military in the form of an “anti-recruitment leaflet.” Multiple printers have refused to print the comic due to the fact that they find it offensive. Despite the fact that this suppression of speech is not by a governmental agency, and therefore not under the protection of the First Amendment or Article 10 of the European Convention of Human Rights, it still has chilling repercussions.

(Don’t) Join the Army is a comic that was fully funded on Kickstarter as of August 11, 2013. The comic is a satirical critique of the British Armed Forces and its part in the war in the Middle East. In addition to visual depictions of the war itself, the comic contains mock ads for an army toy called “Action Man”. The ad depicts Action Man in a wheelchair, missing limbs, and even dead. Cullen wanted to shift the focus of from the “cool” technology and uniforms of military action figures to show the real, unfortunate consequences of war. Darren Cullen himself explains his reasoning behind creating the comic:

“Some of it will no doubt be seen as offensive or in bad taste… but I think there is a line between attacking the armed forces for manipulating young people into sacrificing their lives for dubious reasons, and attacking soldiers themselves who, as I see it, are also victims of war.”

Cullen made an interesting choice for the format of the comic. He wanted the comic to be similar to army recruitment leaflets. The comic is meant to be printed on a single folded piece of A5 paper that creates a Bayeaux Tapestry style depiction of the war on one side and a 20 page comic on the other side. Many printers are unable to print something in this unconventional format, which severely limited Cullen’s printing options. The first three printers that Cullen approached accepted the job based on the specs of the print alone. As soon as they received the actual content to be printed, the job was turned down. In a message on his Kickstarter, Cullen apologized for having to push back the release date due to this issue and articulated: 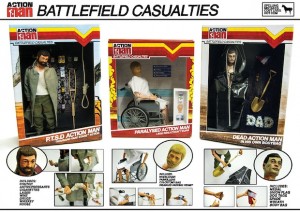 “It is of course utterly maddening that a printer would refuse to print something they disagree with politically, but obviously I understand that legally and commercially they have right to decline whichever job they like. I do think however that this incident says something about the way people regard the army as an almost holy institution and therefore what I’m doing as a kind of blasphemy.”

Fortunately, Cullen was eventually able to find a printer that did not object to the content of the comic book and it is set to be released this week. While Cullen was able to successfully get (Don’t) Join the Army printed, this brings to light the fact that obstacles to free expression may come in many forms.