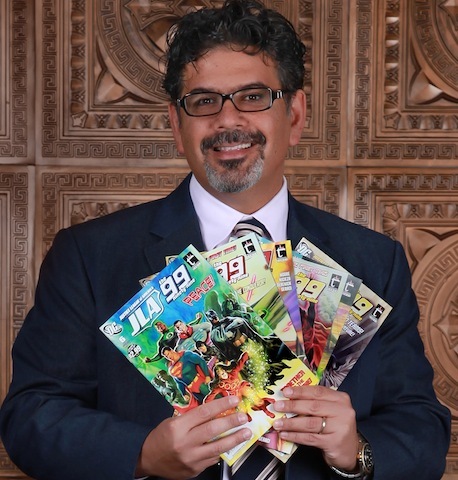 Last week the Islamic State of Iraq and Syria, the militant group better known as ISIS, took a brief timeout from overtaking cities in Iraq to call for the death of Kuwaiti-American comic creator Naif Al-Mutawa. They claimed on Twitter that his series The 99 is “slanderous to Islam” and that “there is no good [for] us if he remains alive for over three days.”

It’s hardly a surprise that The 99 would raise the ire of groups like ISIS, since Al-Mutawa’s goal in creating the comics was to “take back Islam from its hostage takers,” the violent extremists who distort the faith in the eyes of much of the world. Each character in the series represents one of the 99 Virtues of Allah listed in the Koran, including generosity, mercy, wisdom, strength, and courage. Al-Mutawa wanted to stress how these are universal virtues as well, so his heroes come from 99 different countries and are not exclusively Muslim. Some of the women choose to wear hijab or niqab, while others leave their heads uncovered. Al-Mutawa’s project, which began in 2007 and also spawned an animated TV series, already ran into controversy earlier this year when Saudi clerics issued a fatwa calling it “evil work that needs to be shunned.” But while the TV series was banned in Saudi Arabia, that fatwa did not rise to the level of calling for Al-Mutawa’s head.

For his part Al-Mutawa, a clinical psychologist who divides his time between Kuwait City and New York, said that he takes the threat seriously but is not deterred. According to the Kuwait Times, he said on Twitter that he will take legal action for the death threats but “I really do not believe in ISIL and Qaeda… I don’t care about them.” Meanwhile he has received an outpouring of support on social media, including from Ms. Marvel author G. Willow Wilson. CBLDF gladly joins that chorus, offering kudos to Al-Mutawa for standing strong against intimidation!