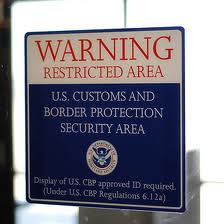 As evidenced by the Ryan Matheson case, one of the risks we face as comics fans is the search and seizure of electronic devices such as cell phones and laptops when we cross international borders. Two recent decisions in Riley v. California and United States v. Wurie seemed to offer some hope that our cell phones would be protected.

Sadly it does not appear that such requirements exist in every area of the country. There is still at least one place a warrant does not appear to be needed for the government to dive into your digital life. I am talking about the United States international borders.

Enter the United States v. Saboonchi case. Some believe this case to be one of the first in a wave that will help to better define the recent result of the Supreme Court’s holding in Riley. Riley, for those who don’t remember, was a Supreme Court case a few months ago that mandated the need for warrants to search cellphones in the United States. (For more information see our previous article on the subject.)

In Saboonchi, two United States citizens, Ali Saboonchi and his wife, were crossing the Canadian-U.S. border when they were stopped by the United States border patrol. The border patrol detained Saboonchi and his wife and questioned them separately. During questioning, the agents seized Saboonchi’s electronic devices without his consent or knowledge. Eventually, the two were granted access into the United States, but two cellphones and a flash drive were retained by the border patrol. Copies of the devices were made and reviewed at a separate facility 400 miles away. The original devices were eventually sent back to Saboonchi.

The information from the devices allegedly revealed that Saboonchi was involved in possible violations of the U.S.-Iran trade restrictions. This information lead to charges against Saboonchi of four counts of illegal export and one count of conspiracy. In an attempt to suppress, or rather throw out, the discovered information Saboonchi leaned on the new rules put forth by the Riley case. The reviewing judge, U.S. District Judge Paul Grimm, denied the suppression, saying that the Riley holding did not apply to the border patrol officers. In other words: The requirement for warrants to search cell phones is not applicable to border searches. (That is, according the current interpretation of Judge Grimm.)

Fourth Amendment advocates believe that such an exclusion of warrants for cell phone searches on the border is merely semantics, but that is not the case. The argument goes that the devices that were seized and looked through were acquired without a warrant and so should not be considered legally admissable evidence. Therefore, suppression of the information would make sense from a legal standpoint.

However, the lack of a warrant argument is irrelevant in this situation because of the location and background in which the devices were seized. Before the bellows exclaiming how such irrelevancy undercuts the Fourth Amendment rights of people in Saboonchi’s situation, it must be understood that it is not that black and white.

In normal circumstances in the interior (a.k.a., not at international borders) of the country, the decision in Riley dictates that a warrant is needed to search a cellphone for data. To acquire such a warrant the level of probable cause must be met. This is a higher level of scrutiny to meet than the one imposed at the border, which only calls for reasonable suspicion. But why the difference? The difference is based on the balancing test used by the courts:

“[W]e generally determine whether to exempt a given type of search from the warrant requirement “by assessing, on the one hand, the degree to which it intrudes upon an individual’s privacy and, on the other, the degree to which it is needed for the promotion of legitimate governmental interests.” [Cited from the Riley opinion, quoted in part from Wyoming v. Houghton.]

This is where the importance of the border comes in. I’ll let Chief Justice Rehnquist explain why:

“The Government’s interest in preventing the entry of unwanted persons and effects is at its zenith at the international border. Time and again, we have stated that “searches made at the border, pursuant to the longstanding right of the sovereign to protect itself by stopping and examining persons and property crossing into this country, are reasonable simply by virtue of the fact that they occur at the border.” [Quoting Chief Justice Rehnquist’s majority opinion in United States v. Flores-Montano. (152-153)]

When you combine the above increase in government interest along with…

“The expectation of privacy is less at the border than it is in the interior.” [Quoting Chief Justice Rehnquist’s majority opinion in United States v. Flores-Montano. (540)]

…you can see how the government interests almost outweigh your private interests outright. The keyword there is “almost.”

The border patrol is allowed to search to a certain extent simply because you are entering the country. This is referred to as a “routine” search. To pursue a routine search, there does not need to be any level of suspicion or a warrant. The person is allowing themselves to be exposed to such a level of scrutiny in order to enter the country. If the border patrol wishes to go beyond the extent given to them in the routine search, then the level of reasonable suspicion must be met.

Despite all of that, the border patrol is not allowed to search and seize without any reason at all. In the Saboonchi case, the border patrol received information while checking on Saboonchi. I will not get into specifics on the information but essentially they were told that a proverbial red flag had come up with his name and that there was reasonable suspicion with regard to his activities. The overseeing judge contended that even if the border patrol had needed to reach the level of reasonable suspicion, they would have succeeded, but they didn’t need to meet that level and it is irrelevant to the case. That is at least according to the judge in the case at hand. Further appeals may change the verdict.

Can Saboonchi be a case that helps to change the rules and better protect us at border searches? It can, but because of the outside information the border patrol received before the seizure, it probably isn’t the ideal case to take up on appeals. However, it is an important case to talk about as a means to illustrate how the location of where you are is important to just what exactly the government can do with your electronic devices and how they can justify it.

So, what does all of this mean for anyone and everyone worried about their information being looked at when entering the country?

It means that when you are crossing into the US border, there is a certain level of scrutiny governmental employees have the legal authority to administer. That means that you should be aware of your rights and your location at all time. The Riley case was a huge win for our Fourth Amendment rights, but the battle for protection of privacy still rages on. If you are not equipped with the proper knowledge then you are not equipped to protect your privacy.

For some assistance and useful advice in navigating these muddy waters, please visit our advisories on crossing international borders and searches at the Canadian border.

Staff Writer James Zachary Swartz is a law student with a comic problem.