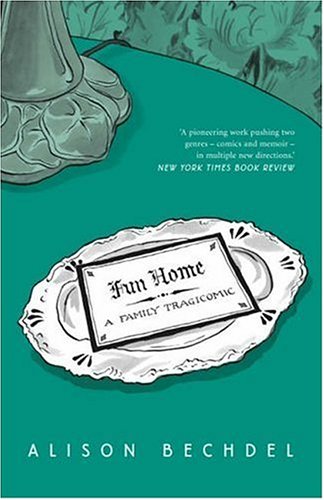 Fun Home creator Alison Bechdel received some well-deserved recognition and support for her work yesterday, when it was announced that she is one of the 21 recipients of a 2014 MacArthur Foundation “genius grant.” In a profile on its website, the Foundation said that “Bechdel is changing our notions of the contemporary memoir and expanding the expressive potential of the graphic form.”

Bechdel’s selection to receive the $625,000 no-strings-attached award is a resounding riposte to some South Carolina legislators, who earlier this year proposed cutting the budget of the College of Charleston in retaliation after Fun Home was used as part of a one book/one campus program there. State Rep. Garry Smith, one of the sponsors of the legislation, said that Bechdel’s memoir “could be considered pornography” and was not appropriate state-sanctioned reading for college students. After months of legislative wrangling, lawmakers eventually “compromised” by restoring the funds to the College but earmarking them for teaching students about U.S. founding documents including the Constitution.

Bechdel is currently on an artist residency in Italy and said “the world started spinning” when she received the call from the MacArthur Foundation there a few weeks ago. She is the second graphic novelist to earn a grant from the foundation–Ben Katchor got one in 2000–but “believed to be the first woman cartoonist,” according to the Washington Post. As for what she plans to do with the money, she told the Los Angeles Times: “It will give me a lot of security that I don’t have. Pay off some debts, save for retirement — really boring stuff. I’ve been a cartoonist all my life!” Big congrats to Bechdel, and kudos to the MacArthur Foundation for financing the “boring stuff” in her life so she can concentrate on what she does brilliantly!