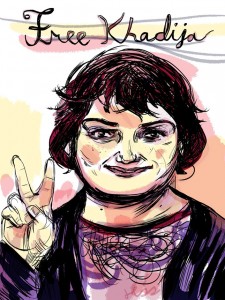 Investigative journalist Khadija Ismayilova has been a thorn in the side of Azerbaijan’s government for years. Her reporting has exposed high-level corruption and nepotism in President Ilham Aliyev’s administration, so it’s sadly unsurprising that she was arrested on spurious charges last December and is still being held without trial. Now cartoonists around the world are lending their skills to a social media campaign to bring attention to her plight and to pressure the government to #FreeKhadija.

The campaign is organized by PEN, which recently gave Ismayilova its annual Barbara Goldsmith Freedom to Write Award. The New Yorker’s Liza Donnelly helped to launch the effort earlier this month with a comic strip summary of the arrest, which came about only after intimidation and blackmail efforts had failed to secure Ismayilova’s silence.

Donnelly and The New Yorker cartoon editor Bob Mankoff are also coordinating the collection of international cartoonists’ #FreeKhadija pieces, which will be used to heighten the impact of the campaign on social media. A few of the cartoons already submitted appear below, and you can see the rest here. Keep an eye on that hashtag for more cartoons, and visit PEN’s Take Action page where you can send a letter to Azerbaijan’s president on Ismayilova’s behalf! 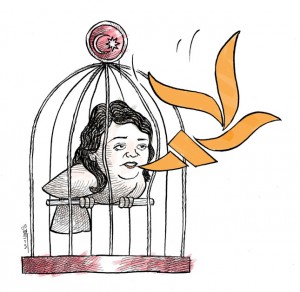 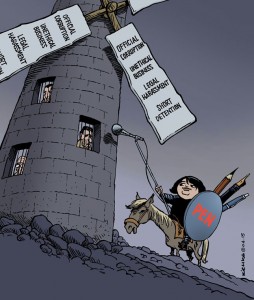