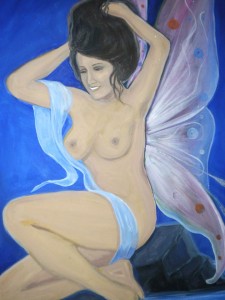 City officials in San Bernardino, California, last week agreed to restore a painting of a nude fairy to its place in a public library exhibit after the National Coalition Against Censorship said its removal raised “serious constitutional concerns.”

The painting by Rose Loya, called “Free Spirit Fairy,” is part of an exhibit from the Inland Empire Latino Art Association currently on display at the Norman Feldheym Central Library. There is nothing overtly suggestive about the work, but the fairy is unclothed — not terribly unusual for a mythical being. Soon after the exhibit opened in late April, Loya’s painting was removed, having been deemed “inappropriate.” Exactly who made that decision is unclear, but apparently it wasn’t library director Ed Erjavek, who told the San Bernardino Sun that “he hadn’t received any complaints from patrons and agreed that the painting should be displayed.”

After receiving a gentle reminder from NCAC that “‘nudity alone’ does not place otherwise protected material outside the mantle of the First Amendment,” San Bernardino Deputy City Attorney Steven Graham grudgingly agreed to restore “Free Spirit Fairy” “without admitting any wrongdoing” on the city’s part. They simply wanted to avoid the expense of a lawsuit, he explained — and there was the little matter of free speech as well. Still, Graham hinted that artistic nudity is somehow not “age-appropriate” for children. NCAC had some thoughts on that at their blog:

Really? Children see artistic representations of nudes in every museum, as well as in public spaces. Adults, possibly shamed about their own thoughts and fantasies, may occasionally be embarrassed, but if anyone can look at a nude and not see an issue, it is a child.

Whatever the city’s reasoning, we are glad they concluded that this was a legal battle they would surely lose. Welcome back, “Free Spirit Fairy!”