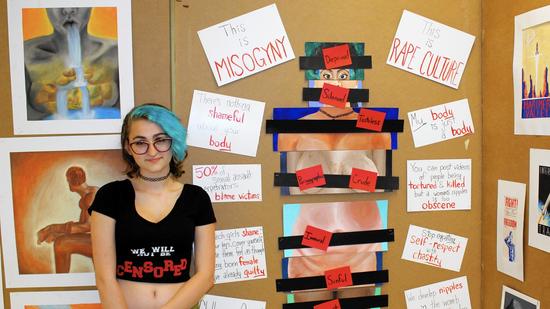 A high school senior in Glastonbury, Connecticut nearly saw her semester-long art project about body shaming and censorship of women’s bodies censored by school officials last week. But instead of giving up, she decided to fight for her creation–and won.

Senior Emily Mann spent months working on a mixed-media project that tackles issues including misogyny, rape culture, victim-blaming, and consent. The central focus of the piece is an assemblage of women’s bodies in many shades and shapes, overlaid with strategically placed black bars and words such as “crude,” “immoral,” “sinful,” and “indecent.” But while Mann’s work does not even expose anything that wouldn’t be allowed on Facebook, for instance, she was initially told by Glastonbury High School Principal Nancy Bean and the school district’s art director Cindy Parsons that she would not be allowed to participate in the end-of-semester student art show. According to a post at BlogHer, they told Mann that “high school is not the place to make social statements.”

Although Mann was at first crushed to find that the very phenomenon her project critiqued was now being applied to that same project, her mother laid out her options: “Give up or do something about it.” She opted for the latter, meeting the next day with Superintendent Alan B. Bookman and Assistant Superintendent Rosemary Tralli. They wisely saw that Mann’s art did exactly what art is supposed to do. Bookman told the Hartford Courant:

We all looked at it together and decided it had a good message and art is supposed to have a message. It’s a good message for our students to hear. We have to be open and listen to the message students are trying to give to adults and their fellow students.

So last Wednesday evening, Mann proudly stood by her piece at the student art show. She says the experience has only served to strengthen her belief in standing up for freedom of thought and freedom of expression:

Art is the perfect place to make a statement. Body shaming is something teens are dealing with every day. This whole ordeal has shown me I do have power. People can get behind me when I am pursuing something I feel is important. It has shown me if you feel passionate about getting your point across, just fight for it.

Congratulations to Mann on standing up for her work, as well as to Glastonbury Public Schools’ top administrators who realize that one of the essential functions of art is to name and confront problems in society. The young artist herself is reportedly headed to Savannah College of Art and Design this fall, and we think she’ll do just fine!

← China Bans Anime and Manga from the Internet
Be a Free Speech Superhero with CBLDF At HeroesCon, June 19-21! →