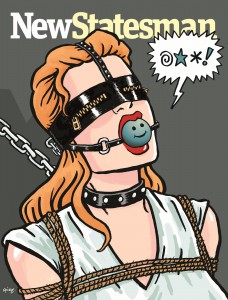 The most recent issue of the UK’s New Statesman magazine, on the theme of “Saying the Unsayable,” was originally slated to feature a cover by Art Spiegelman. But the legendary creator of Maus pulled the cover “at the very last minute” by his own description, when the magazine reneged on an informal agreement to also print his “First Amendment Fundamentalist” piece reflecting on the Charlie Hebdo attack.

The issue was guest-edited by Neil Gaiman and Amanda Palmer, who according to Spiegelman were blameless in the incident but wound up getting “mugged in the crossfire.” At Gaiman’s blog on Sunday, they provided an extensive joint account of events, prefaced by “the short tl:dr version” which reads:

We loved Art’s cover. (So did the New Statesman.) We are really sorry that the cover wasn’t used. Art pulled it because he felt that agreements with the NS weren’t being kept, specifically, he had done a comic that he wanted in the issue, and as Guest Editors we’d assured him that wouldn’t be a problem. Communications between Art and the NS were not good: they didn’t get back to him on his questions, or, we think, understand that they were meant to include the comic. When the NS editors learned about the comic it was already too late to put it in the magazine, and when the Amanda-and-Neil-put-it-online solution failed, Art, with enormous regret, pulled his cover.

The comic that caused the New Statesman to balk is a full-page meditation on the impact, responsibilities, and rights of cartoonists — including “the right to be an idiot.” Even though it includes a turbaned smiley face that may or may not be the Prophet Mohammed, it has run in other periodicals around the world, including The Nation in the US and Le Monde in France, but not in any UK publications. In fact, the New Statesman editors had already passed on it earlier this year, saying at the time that the magazine had already run enough Charlie Hebdo coverage. Gaiman and Palmer found it perfectly suited to the theme of their guest issue, however, and told the fulltime New Statesman staff that “First Amendment Fundamentalist” would be included along with the Spiegelman cover.

But as they were rushing to deadline, Spiegelman received word from the New Statesman that they would not be running the comic in the magazine after all. Palmer takes up the narrative here:

Because of timing, or because of the content? Timing, probably. My brain did a few frantic calculations. Had we sent it over? Had we missed it in the master list? Oh shit. Maybe. I admitted to Art that we hadn’t been the most organized editors – but we’d call the magazine right away. The worst thing that would happen was that it would miss the print deadline, but it would make it into the online version, which was, hopefully, going to see even more traffic than the printed issue, anyway. Art sighed and said he’d be happy enough with that, but he needed a promise from The New Statesman….We phoned the New Statesman. It was too late for the comic to get into print, they said. Could we run it online? They froze. Apparently, there had been a New Statesman-wide meeting and consensus that the magazine wouldn’t print any images of the Prophet Mohammed.

Palmer and Gaiman then brokered a tentative deal to include a thumbnail of the comic in a blog post on the New Statesman website, linking to the full-size version that already existed elsewhere online. But that too collapsed when Spiegelman’s agent asked the New Statesmen publishers to sign a written agreement; the latter said they would prefer to pull all of his content including the cover because “if they failed to do as Art requested, he could have the whole issue pulped.”

So, with no time left to renegotiate, the issue went to press with a cover featuring a pre-existing press photo of the guest editors. In wrapping up their joint blog post, Gaiman and Palmer expressed sympathy and appreciation for the New Statesman staff who dealt with the crisis — but they added a caveat:

This is how we get into this mess in the first place. “We would, but….” “We should, but….” “We believe in freedom of the press, but….” It’s death by a thousand buts. We wanted to say the unsayable, and draw the undrawable. We ended up feeling like we’d tried, and, due to human error on our parts and on the magazine’s, failed.

We just wish we were as proud of the cover as we were of the content.

Have a nice day.