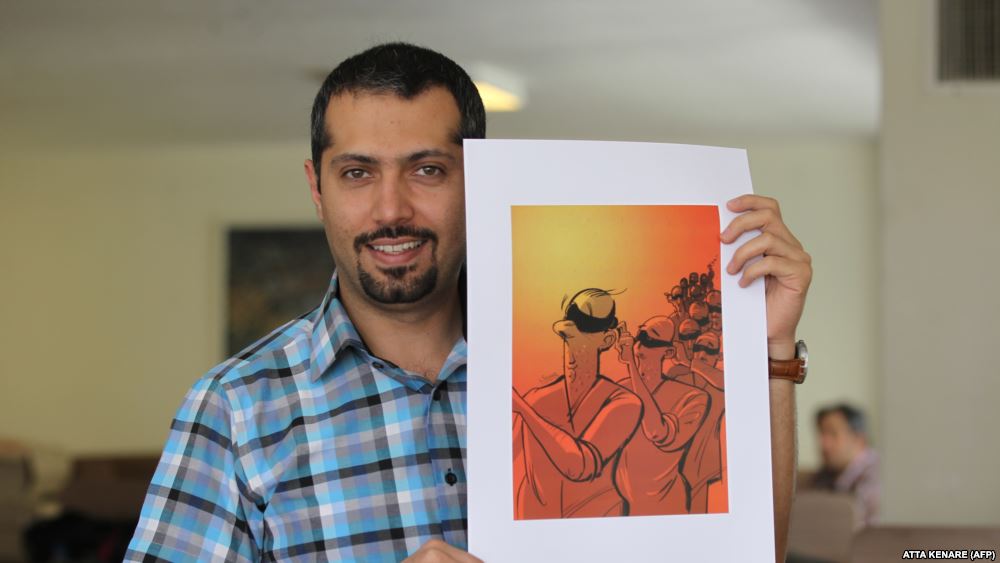 Iranian authorities arrested another cartoonist this week, allegedly to make him serve out a previous sentence imposed two years ago because the state “had a different interpretation of his cartoons than he had,” according to his lawyer. Hadi Heidari previously served only one month of his year-long sentence, but it is unclear why authorities chose this time to re-arrest him.

Some sources have drawn a link between Heidari’s arrest and a cartoon that he posted on Instagram, mourning the victims of the Paris attack, but it’s not at all clear the two were related. Iran’s rulers are not sympathetic to ISIS, and President Hassan Rouhani quickly condemned the attacks early on Saturday. While Iranian hardliners are nevertheless “wary of any perceived expression of friendly overtures to secular Western countries, which they might have thought the cartoon conveyed,” it appears more likely that Heidari was arrested in retaliation for his domestic reformist advocacy.

Like fellow imprisoned cartoonist Atena Farghadani, Heidari first came to the government’s attention in 2009, when he was involved with the Green Movement that arose after the disputed re-election of then-President Mahmoud Ahmadinejad. He was arrested in 2009 for “assembly and collusion against national security” and in 2010 for “propaganda against the state,” but not convicted on either count.

In 2012, though, a national furor arose in response to the cartoon shown here. Heidari’s opponents say the men tying blindfolds on each other are soldiers in the Iran-Iraq War of the 1980s and that the cartoon is therefore an insult to the military, but he denies that they represent soldiers, pointing out they’re not wearing military uniforms. Nevertheless, Heidari was called into court, the manager of Shargh Newspaper which published the cartoon was arrested, and the newspaper itself was temporarily banned.

Heidari’s arrest is just the latest in a recent crackdown on journalists and creatives who dare to criticize Iran’s leaders. In addition to the sentencing of Atena Farghadani to over 12 years in prison, the Committee to Protect Journalists counts at least five journalists arrested just this month. Then there’s Iranian-American Washington Post reporter Jason Rezaian, held for over a year on espionage charges and allegedly convicted on an undisclosed count in August. In October, poets Fatemeh Ekhtesari and Mehdi Mousavi were sentenced to 11 and 9 years in prison respectively for “insulting the sacred in their poems, publishing unauthorized content and spreading anti-state propaganda.” Each also was sentenced to 99 lashes, possibly for shaking hands with unrelated members of the opposite sex at an event in Sweden. Farghadani and her lawyer currently face similar charges.

Many details in Heidari’s case have yet to be pinned down, as reliable news out of Iran is often hard to come by. We will have more on the story as it develops!