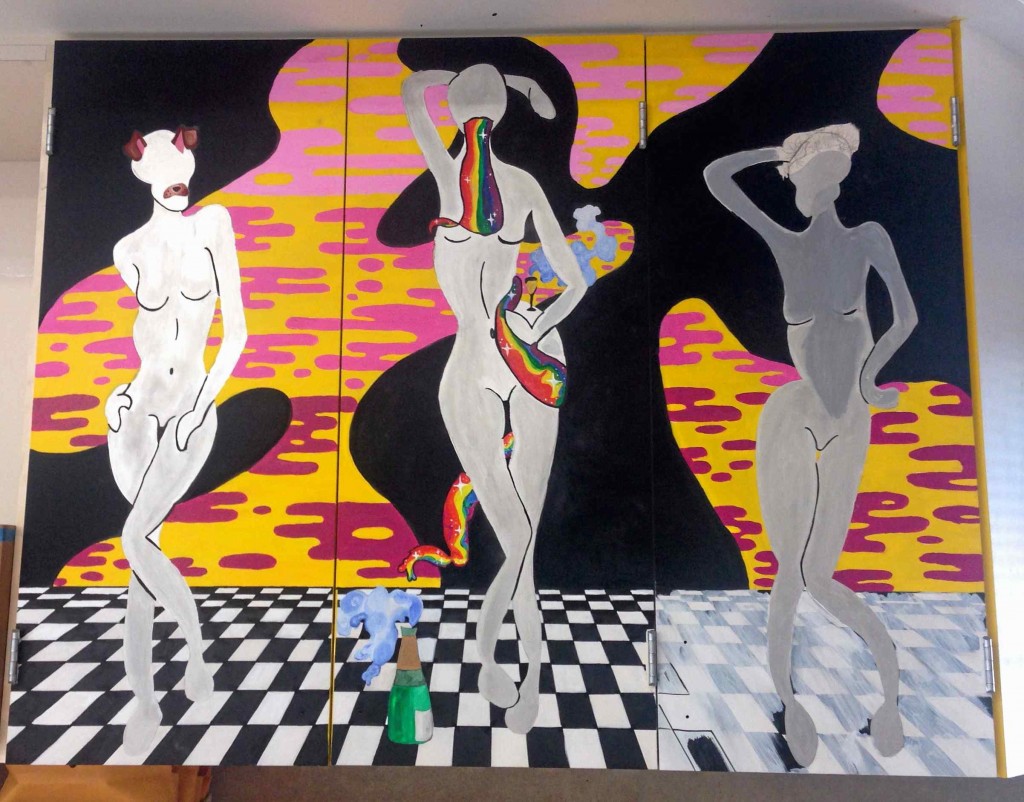 A recent high school graduate in Scotts Valley, California is hoping to “spark a conversation about art and censorship” at her alma mater after a parent complained about nudity in her senior art project and she was given the choice of censoring the work or removing it altogether. Madeline Volk, now a freshman at the University of California-Davis, said that the forced modification of her work “defeats the purpose of my whole message” about body image and social media.

Volk’s project, a mural painted across three built-in cabinet doors in an art classroom at Scotts Valley High School, originally showed three abstract nude figures with feminine attributes posing voluptuously while sporting popular Snapchat filters. The center figure also balanced a champagne glass on her posterior, à la Kim Kardashian. Volk designed and mostly completed the mural before she graduated in May, but sought and received permission to finish it early in the new school year before she left for college. The art teacher who oversaw Volk’s work last year also happened to depart the district in May and was replaced by a new teacher.

After a back-to-school open house on September 14, the new art teacher informed Volk that one parent had complained her mural was “pornographic.” Given the choice of covering up the abstract nudity or removing her year-long project altogether, Volk chose to give her subjects short shorts and skimpy tops. She also painted a message on each figure: “censored,” “my body my art,” and “free the nipple.”

In an interview with the Santa Cruz Sentinel, SVHS principal Valerie Bertineau was apologetic and seemed to admit that the situation could have been handled better. It’s unclear if she was aware that student free expression rights are actually outlined in school district policy, which says that “students’ freedom of expression shall be limited only as allowed” in state law, including Education Code 48907. That law only prohibits material “which is obscene, libelous, or slanderous”–none of which describe Volk’s project by a long shot.

Neither the district policy nor state law outline the steps to be taken in case student expression is challenged as it was in this case, but it would have been easy enough for the teacher and/or administration to direct the complainant to the policy and possibly discuss why figure drawing is a fundamental skill for any artist. Volk’s case is the latest in a recent string of challenges to student-produced art in schools, including another project about body image in 2015 and a Kentucky student’s take on recent police shootings earlier this year.