Comics Book Legal Defense Fund and the National Coalition Against Censorship have joined together to speak out against the challenge Rumford Public Library is facing to their Banned Books Week display. Below is the statement released today by the organizations in support of the library.

A group of pastors in Rumford, Maine are attempting to have LGBTQ books banned from the Rumford Public Library’s display of banned books. The library is holding a board meeting today, where the controversy will be discussed. The National Coalition Against Censorship and Comic Book Legal Defense Fund support Rumford Public Library’s display and freedom to choose how best to serve their community. NCAC and CBLDF oppose efforts to limit a whole community’s access to books based on the personal viewpoints or religious beliefs of some groups or individuals in that community. As public institutions, libraries are obligated not to discriminate on the basis of viewpoint or sexual orientation.

The display coincides with Banned Books Week, an annual celebration of the freedom to read, highlighting books that often draw challenges in schools and libraries. Half of the books on this year’s American Library Association Top 10 Banned Books list tell stories of LGBTQ characters. Books representing a wide variety of experiences and voices allow readers, particularly children, to find connection, safely explore unfamiliar ideas, and broaden their understanding of the world.

CBLDF will keep you updated as this situation develops. Follow us on Twitter and Facebook for news updates on this and other important events that affect free expression and the right to read.

CBLDF has learned of an attempt to ban several books, including the LGBTQ themed graphic novels My Lesbian Experience With Loneliness by Nagata Kabi and Queer: A Graphic History by Meg John-Barker and Julia Scheele from the Rumford Public Library in Maine. Locals supporting the books have expressed an urgent call to Maine residents in the Rumford area to speak up in support of keeping these books in the library ahead of a library board meeting today at 2:30 PM Eastern Time.

Three local church leaders objected to these and other books within a Banned Books Week display. The challenge specifically targets the Nagata Kabi manga as “immodest and inappropriate for a public setting” on the basis of its cover alone. The letter also states, “A number of other books in the display were promoting homosexuality, such as the book Two Boys Kissing and others.” According to a Facebook post by local resident Katrina Ray-Saulis, one of the letter’s signers “has verbally expressed that he would like to pursue the destruction of all books regarding homosexuality in the library.”
Local residents are being called upon to “let the Rumford Public Library know you support this display, you support your LGBT+ community members, and consider attending the meeting on Monday.”
CBLDF is following this story closely and supports efforts to protect access to these valuable books. We encourage patrons in the Rumford area to please consider voicing their support in a brief, respectful email to the library’s director [tbutler at rumford dot lib dot me dot us], and for non-residents to please share this story with patrons in the Rumford area who may have an interest in voicing their support or attending the meeting. 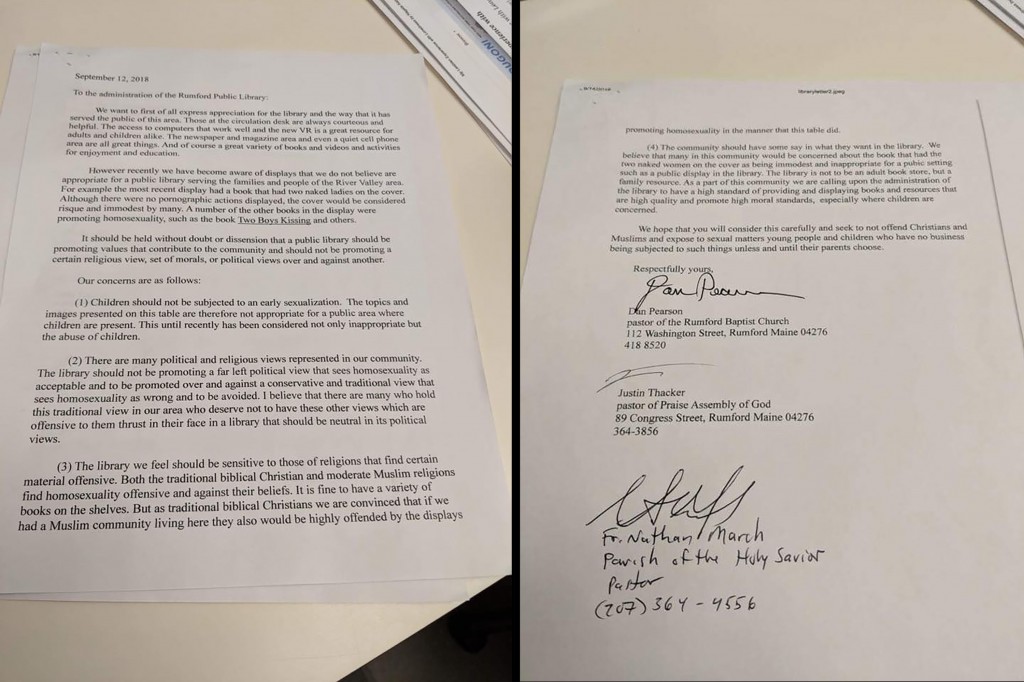