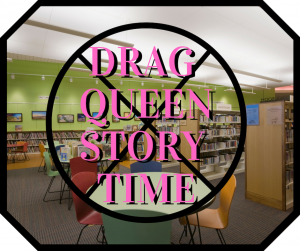 Georgia’s Fulton County decided to cancel a popular Drag Queen Story Time with Miss Terra Cotta Sugerbaker without provided any explanation. Miss Sugarbaker, a character performed by Steven Igarashi-Ball, took to Facebook asking for supporters of the event to reach out to the county and defend their free speech rights. Project Q Atlanta spoke with Igarashi-Ball about the censorship.

If they’re going to censor my event, what event would be next? I feel like libraries have to be safe spaces and bastions of freedom of speech, and I feel like this goes against all of that. I have a right to know who has an issue with the event, and no one has brought that to my attention.

Traditionally, the Drag Queen Story Times in that area are scheduled at the Ponce de Leon Branch, but Igarashi-Ball was approached by another library branch in Alpharetta about setting up an event for April 6. Then earlier this month, Igarashi-Ball received an email from Atlanta-Fulton Public Library marketing and public relations department informing him that the event was cancelled, but not by the library. In fact the library wished to hold the event but the county had overruled their choice and cancelled it.

For weeks Igarashi-Ball and supporters of the Drag Queen Story Time have been reaching out to Fulton County looking for an explanation of the decision. According to Project Q, the only responses they received were from the county spokesperson, Jessica Corbitt, informing them, “Fulton County has dozens of facilities that offer a diverse array of programs. Not every program is offered at every location.”

This is of course an inadequate response on every level. Obviously every library couldn’t possibly host every event available, but if a library wants to hold an event and is able to schedule that event without issuess, for the county to step in and decide to cancel it without providing an explanation, is absurd. Igarashi-Ball told Project Q, “I felt that if our program and myself were under attack, I would have a right to know who my attackers were.”

The spokesperson, Corbitt, also rexpounded that Igarashi-Ball should continue the event at the Ponce de Leon Branch, clearly not comprehending how condescending it sounds to be told to continue the very popular program at its current location, or how infuriating it is to have the county evade accountability by refusing to offer transparency in their decision making process. From the Project Q investigation:

Project Q reached out to Corbitt as well and received a similar response to our questions.

“As you mentioned, the Drag Queen Story Time event has been quite successful and well received at the Ponce de Leon Library,” Corbitt wrote. “We have recommended to the organizer that it continue at the location where it has a strong track record.”

Corbitt did not respond to follow-up questions.

Igarashi-Ball is not going to let this stop him from offering the story time to other branches though. He’s even planning to hold an unsponsored version of the Drag Queen Story Time in the Alpharetta branch where it had been previously cancelled. By reserving a meeting room, Miss Terra Cotta Sugarbaker can still read to children and host this popular program, that’s not only fun for kids, but also  focused on diversity and inclusion. The downside of an unsponsored event is that the library is not allowed to promote it, but Igarashi-Ball told Project Q, “we felt it was important to have the event, and the public let us know that they want it.”

He was also adamant that people not blamed he librarians, who were stymied by the county’s decision.
In his interview with Project Q he said,

They have been nothing but cooperative and supportive and I really feel like they’ve gone out on a limb for us. They are not the ones creating the problem, but we keep getting put in circles.

Nobody’s willing to take the blame for the problem that I feel [the county has] created.

The meeting rooms are booked up for the original date of April 6 in Alpharetta, but make sure to follow CBLDF on Twitter and sign up for our weekly newsletter to receive updates of when the event is scheduled for.