It was established in Roth v. United States that the freedom of speech would not extend to materials that were considered obscene. But what happens to a book store that unknowingly carries books that contain obscene material? Is a book store owner responsible for knowing the content in all of the books that he or she sells? In Smith v. California (1959), the Supreme Court ruled that an ordinance requiring a book store owner to be strictly liable for possessing or selling obscene material — meaning the owner had to know the contents of every book in the store — violated First Amendment rights. 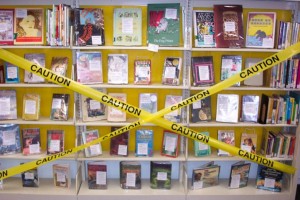 Eleazor Smith was a book store owner in Los Angeles in the 1950s. Like most book stores, he carried a multitude of books that spanned many different topics, a vast collection that could not possibly be read by any one person in its entirety. He was convicted under a Los Angeles city ordinance that made it a criminal offense for a book store owner to possess or sell any obscene or indecent writings. Unlike most criminal liability laws, this law did not contain any mens rea (literally, “guilty mind,” or the mental element of a crime) requirement. It was subject to strict liability. In layman’s terms: It didn’t matter if the book store owner was unaware that the content of some of his books was obscene, he could still face jail time just for having them. Given that any bookstore contains thousands of books, a law like this imposed a huge burden on book store owners!

Smith appealed the decision, arguing that the law was unconstitutional, and the case made its way to the Supreme Court. Chief Justice Hughes, in his opinion, begins by highlighting the importance of the freedom of speech and press as essential personal liberties, freedoms that retail booksellers play a significant role in propagating. He attacks the Los Angeles ordinance for its lack of knowledge requirement. He quotes Dennis v. United States, stating:

“The existence of a mens rea is the rule of, rather than the exception to, the principles of Anglo-American criminal jurisprudence.”

Because a law of this nature is uncommon, it must pass a stricter standard. The fact that the law raised questions regarding the freedom of speech means it also raised some red flags. It was noted that on its face, this ordinance was capable of many unconstitutional applications. The Los Angeles ordinance made it criminal to posses any books containing obscene material in a book store, but it also carried with it an unintended restriction on the dissemination of books that are not actually obscene. Hughes explained how the law could limit the public’s access to constitutionally protected books:

For if the bookseller is criminally liable without knowledge of the contents, and the ordinance fulfills its purpose, he will tend to restrict the books he sells to those he has inspected; and thus the State will have imposed a restriction upon the distribution of constitutionally protected as well as obscene literature. It has been well observed of a statute construed as dispensing with any requirement of scienter that: “Every bookseller would be placed under an obligation to make himself aware of the contents of every book in his shop. It would be altogether unreasonable to demand so near an approach to omniscience.” The King v. Ewart, 25 N. Z. L. R. 709. 729 (C. A.).

When faced with criminal prosecution, it would be in the best interest for any book store owner to inspect every book he wished to carry with a fine-toothed comb. Imagine inspecting every book in a store. Doing so would take an exorbitant amount of time and would limit the number of books that a book store could carry without the worry of facing criminal sanctions. Additionally, if a book store owner inspected a book and couldn’t tell whether the book was obscene, he or she would likely err on the side of caution and refuse to carry the book, which would also limit the number of books that are carried. Essentially, the law interfered with the sale books that are not obscene. The Court held that there is an interest in restricting obscene matter, but the Los Angeles city ordinance went too far. Therefore, the Supreme Court ruled it unconstitutional.