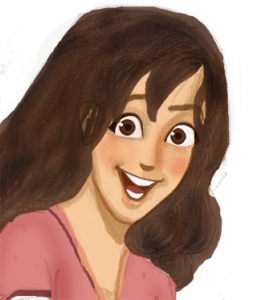 After creating and sharing cartoons critical of a controversial “godman” or guru, Indian cartoonist Kanika Mishra has recently found herself on the receiving end of harassment and threats of violence via social media, according to Cartoon Movement.

Kanika was inspired to create her cartoon character Karnika Kahen last year after guru Asaram Bapu was accused of sexual assault against a 16-year-old girl. Less than a year earlier, Asaram had publicly stated that the victim of the notorious 2012 New Delhi gang rape–who was assaulted so violently that she later died of internal injuries–was partly to blame for her assault and simply should have begged her attackers to stop. Enraged at Asaram’s apparent hypocrisy, Kanika sensed a need for cartoons featuring an aam ladki, or everywoman, to join the proliferation of aam aadmi panels in which male characters comment on Indian current events. She drew several cartoons skewering Asaram and posted them on Facebook and Twitter, where they were soon discovered by major media outlets that featured her in interviews.

Once Kanika’s cartoons found a wider audience, Asaram’s loyal followers commenced a relentless campaign of social media harassment, repeatedly threatening her with rape and murder. In fear for her life, Kanika reported the threats to Mumbai’s Cyber Crimes unit and the local police. Even so, she never abandoned her cartooning mission, she said:

I was very scared. For months. I didn’t come out of my home. I was so afraid that I was not able to sleep properly. But, I kept making cartoons on Asaram until his blind followers got tired and stopped threatening me….I got lots of support from people all over the country and other cartoonists. It helped me to continue my fight.

Eventually Asaram was arrested in connection with the alleged assault, and his trial began this week. Kanika notes that this seems to have chastened his followers somewhat, as she now receives only the occasional online threat or call from an unrecognized number. But while the controversy over Asaram may have died down, she does not plan to stop drawing Karnika Kahen any time soon:

We have many famous male cartoonists, but not one female cartoonist. It shows that women are still not considered mature enough to make a political or social comment, at least in the world of cartoons. I want to change that….It’s not only about the issues related to females only but representing the voice of the women of our country on social and political issues.