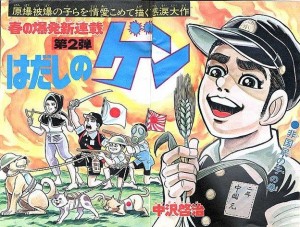 A mayor in Izumisano City in the Osaka Prefecture, Japan, has demanded that all copies of Keiji Nakazawa’s internationally renowned manga Barefoot Gen be removed from elementary and junior high schools in the district.

Izumisano City’s mayor, Hiroyasu Chiyomatsu, felt compelled to review the manga after it was temporarily banned in Matsue City last year for what that school board’s superintendent deemed were gruesome images unsuitable for children. Chiyomatsu called for the removal in Izumisano City because he feels that the book discriminates against the mentally ill and poor. The district has eight elementary schools and five junior high schools, so the ban affects a relatively large number of students. Although Izumisano school principals initially cooperated with Chiyomatsu’s order, at least one is now having second thoughts, telling Asahi Shimbun:

I regret having cooperated with the collecting of the manga even if it was because of an instruction from the head of the education board. Why was only Gen targeted when there are other works that also contain discriminatory terms? I can only believe they were deliberately setting their sights on Gen.

Barefoot Gen is a candid depiction of wartime Japan, focusing in particular on the events preceding, during, and the aftermath of the Hiroshima bombing. Barefoot Gen is considered a classic of children’s literature, not just in Japan, but globally. The book has been translated into dozens of languages, and is used in classrooms here in the United States.

Asahi Shinbun newspaper broke the story, and CBLDF is able to share it thanks to translator and Japanese culture expert Dan Kanemitsu, who emailed us upon learning of the ban. Kanemitsu covered the Matsue City ban, describing the book’s importance in Japan:

The decision to remove Barefoot Gen from an entire public school system’s libraries was a shock to many. Barefoot Gen has long been considered a staple of book collections for children. While its depictions are graphic, both the right wing and the left wing applauded how it portrayed the savage nature of war and how the Japanese suffered terribly from it. The right used Nakazawa’s work to attack the victor’s justice that was directed against Japan by Allies after the war, while the left celebrated Nakazawa’s work as an important reminder of how war should be avoided and the terrible decision making that lead to Japan’s defeat.

Thanks to Dan Kanemitsu for keeping CBLDF apprised of the ongoing legal battles and censorship in Japan.