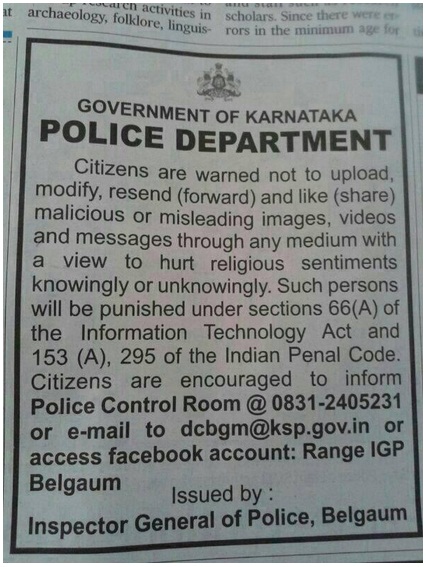 In the state of Karnataka in southern India, Minority Report has come true. Actually, the state’s so-called Goondas Act — an umbrella law covering offenses from bootlegging to gambling — has long allowed police to put habitual offenders in “preventive custody” for up to a year before they offend again. But just this month Karnataka’s government expanded the law even further to make it cover copyright violations and “digital offenses” such as sharing material deemed obscene or blasphemous.

“Goonda” is an Indian term roughly equivalent to “hooligan.” It’s no wonder that the law is colloquially called the Goondas Act, since the real name is the Karnataka Prevention of Dangerous Activities of Bootleggers, Drug-offenders, Gamblers, Goondas, Immoral Traffic Offenders, Slum-grabbers and Video or Audio Pirates, (Amendment) Bill, 2014. Several other Indian states have similar laws that include preventive custody provisions but Karnataka, home to the country’s technology center Bangalore, is the first to apply it to online crimes.

Many Indian media outlets are understandably alarmed at the revised Act and its implications. In an article called “We The Goondas,” the Bangalore Mirror outlined the chilling scenarios now allowed by law:

Even those given [fair use] exceptions under the Indian Copyright Act can find themselves in jail for a year without being presented before a magistrate. Technically, if you are even planning to forward ‘lascivious’ memes and images to a WhatsApp group or forwarding a song or ‘copyrighted’ PDF book, you can be punished under the Goondas Act.

Indian citizens arrested for other nonviolent offenses usually are eligible to apply for bail immediately, but that requirement is suspended for Goondas Act offenders (or potential offenders as the case may be). The hastily-passed amendment to the Act defines a “digital offender” as:

any person who knowingly or deliberately violates, for commercial purposes, any copyright law in relation to any book, music, film, software, artistic or scientific work and also includes any person who illegally enters through the identity of another user and illegally uses any computer or digital network for pecuniary gain for himself or any other person or commits any of the offenses specified under sections 67, 68, 69, 70, 71, 72, 73, 74 and 75 of the Information Technology Act, 2000.

According to the Bangalore Mirror, section 67 of the IT Act, which covers “Publishing of information which is obscene in electronic form,” is the one likely to affect the largest number of users. Without legally defining any of the terms used, it forbids sharing “any material which is lascivious or appeals to the prurient interest.” But it seems the suppression of speech may extend even further, as the Karnataka police separately claimed in a newspaper ad:

Citizens are warned not to modify, upload, resend (forward) and like (share) malicious or misleading images, videos and messages through any medium with a view to hurt religious sentiments knowingly or unknowingly. Such persons will be punished under sections 66(A) of the Information Technology Act and 153(A), 295 of the Indian Penal Code. Citizens are encouraged to inform [police].

Alert readers will notice that the IT Act’s section 66(A)–which deals with “sending offensive messages through communication service[s]”–is not one of the sections listed in the Goondas Act amendment above. But considering the timing of the police ad which appeared in newspapers right around when the new Goondas offenses were receiving heavy coverage, it certainly appears that the authorities wished to at least imply that anyone who creates, shares, or “likes” online content deemed religiously offensive could now be imprisoned without bail, even pre-emptively. Whether the police actually do plan to punish blasphemy as a Goondas offense remains to be seen.

For concrete examples of what sort of content might be considered obscene or blasphemous by the Indian penal system, we can look to some recent publishing controversies. For instance, last year HarperCollins India chose to pixelate nine drawings of genitals in Chester Brown’s graphic novel memoir Paying For It because the publisher was concerned that the unedited comic might contravene the country’s overly vague obscenity law. More recently Dina Nath Batra, an 85-year-old retired school principal dubbed “the Ban Man” by Indian media, convinced Penguin Books India to withdraw and destroy all copies of Wendy Doniger’s scholarly work The Hindus: An Alternative History because he said it was offensive to Hindus. Neither of these books even got to the point where a court could consider whether they were obscene or blasphemous, but obviously both publishers thought there was a good chance that they would be labelled as such. Under the new Goondas Act provisions, any Karnataka citizen who uploads, shares, or possibly even “likes” unedited content from either book on social media could risk imprisonment. That is an outrageous and unacceptable restriction of free expression in the world’s largest democracy.

← Tell Us About Your Banned Books Week Plans!
Bid Now on The Simpsons Family History, Signed and Sketched by Matt Groening! →