This post takes a closer look at the Amulet series by Kazu Kibuishi. The ninth and final volume is expected to be published in 2021.  This guide was written after the first six books had been published.

Amulet is an award-winning graphic novel series about Emily and her brother Navin who, through extenuating circumstances, find themselves battling for the freedom of a parallel world and face mounting dangers with newfound friends. This coming-of-age series continues to win awards. The Young Adult Library services Association named it one of Best Books for Young Adults in 2009. In 2010, it won a Rhode Island Children’s Book Award and was included in a Library Journal list of “Graphic Novels for Reluctant Readers.” In 2011, it received a Young Reader’s Choice Award, and in 2013, it was ranked fourth on Goodreads’ “Best Graphic Novels for Children” list. These books received an Eisner nomination and are currently New York Times bestsellers.

The Amulet series includes (to date):

*note: this guide covers volumes 1-6, although many of the activities will apply to any of the books in the entire series. 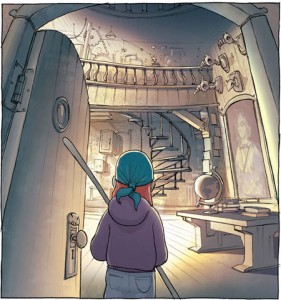 Amulet is about a determined girl named Emily and her younger brother Navin, who move into their great-grandfather’s country house outside a town called Norlen after their father’s death. While the locals believe the house is haunted, Emily and Navin’s mom, Karen, has no choice but to fix up the old house and move in. Times have been hard without their dad, and the home is all they can afford. While cleaning the cobwebs and dust, Emily discovers a locket — the Amulet — and Karen, Emily, and Navin are transported into an alternate world through a small door in the basement. They soon discover that they’re descended from a line of Stonekeepers, people charged with protecting the alien world. They also find shortly after their arrival that something is terribly wrong.

Throughout the series, we learn about Emily’s family’s past, her great-grandfather’s abrupt disappearance, and the power of the Amulet. Emily and Navin, with the help of extraordinary supporting characters, also learn about their own powers — powers to cope, powers to survive, powers to protect others, and powers to grow.

Amulet introduces us to wonderfully faceted characters — robots that bring to mind Star Wars; steampunk robot houses; elves; anthropomorphic foxes, rabbits, and cats; all sorts of flying machines piloted by children and robots; and more. The reader also encounters amorphous voices and characters who feel like pure evil. Amulet’s plot and diverse characters are achieved through rich dialogue as well as lavish art.

Through exciting twists and turns, Amulet deals with familial responsibilities, coming of age, finding the courage to face unwanted challenges, and the importance of teamwork. In each volume we ride a roller coaster of plot twists, along with outstanding art, graphic design, and character development.

These books are geared for kids 7+ and can be easily integrated into language arts and social studies lessons for grades 2-6. That said, they’re wonderfully entertaining for readers of all ages, and would encourage outside-of-school reading.

Amulet Book One: The Stonekeeper
This first volume sets the stage for Emily and Navin’s adventure. We learn of their father’s death and their subsequent move to their great-grandfather’s disheveled house. It is here Emily finds the Amulet, and Emily, Navin, and their mom Karen are taken to Alledia, an alternate world. In Alledia, they meet their great-grandfather, Silas Charnon, and his assistants, who help maintain the house in this alternate world. These assistants include Miskit, a talented rabbit, and robots named Cogsley, Ruby, and Morrie. Emily and her family quickly learn that they were destined to save this alternate world from as yet unknown evil.

Amulet Book Two: The Stonekeeper’s Curse
The second volume begins with Emily and Navin’s quest to find an antidote for the arachnopod poison that is killing their mom. Via the magical house (which turns into a robot) they go the nearest city, Kanalis, to find a doctor and a cure. But they are being pursued and hunted by elves. They also quickly discover that the inhabitants of Kanalis are slowly being altered by an ancient curse. As the elves are about to attack, a humanoid fox named Leon Redbeard helps them escape.

Leon and others from the underground help Emily and Navin discover their purpose and strength. Navin learns that he is the general they’ve heard about in prophecies, and Emily learns to wield the powers and secrets of the Amulet as she, Leon, and Miskit trek for the fruit of the alder tree that will save Karen. In her quest for the fruit, Emily faces many challenges, including attacks by the elves. Emily battles Trellis, the son of the evil Elf King, and breaks the stone of his Amulet — one much like Emily’s.

Amulet Book Three: The Cloud Searchers
In this volume, Emily and her crew seek help for Alledia from the Guardian Council’s Storekeepers, who reside in the lost city of Cialis. To find it, they charter an airship piloted by two humanoid cats named Enzo and Rico. Along the way, they find help from Trellis and Luger, two of the elves who had pursued them in Book Two. It seems when Emily shattered Trellis’s Amulet stone, she released a curse. Luger and Trellis believe the fate of the elves rest with their joining forces with Emily and the others.

Amulet Book Four: The Last Council
Upon discovering and arriving at Cielis, Emily and her family are separated from their friends. Emily finds she must compete for a spot on the Guardian Council, a group of the most powerful Stonekeepers. While Emily and her friends and family are separated, they independently discover that the streets are deserted, the townspeople live in fear, and that there are deep, dark dangers and secrets in Cielis. Toward the end of this volume, Emily confronts one of those dangers in the form of Max Griffin, who has stolen the Mother Stone, which is the stone from which all the Amulet stones were cut. While barely escaping Max’s challenges, Emily finds Vigo, a former Stonekeeper of the Guardian Council. Together, they realize that there are great dangers and challenges ahead of them that must be faced if they are to restore peace and order to the world.

Amulet Book Five: Prince of the Elves
Knowing that Max has stolen the Mother Stone and taken it to the Elf King to forge new Amulets, Vigo and Emily face growing dangers as they try to stop the Elf King. The Cielis Guard (what’s left of the Cielis army) prepares to fight the elf army, but the enemy is getting stronger and the Elf King has begun to use the shard of the Mother Stone to create his own Guardian Council. As both sides prepare for war, Trellis and Emily (with the help of Vigo and others) discover that the stone allows them to go into the past. Emily, while always wary of the voice in the stone, is finding new evidence to support her misgivings. She and Trellis go into the past and find that Max is not exactly what he seems to be and that he has been controlled by the Voice of his Amulet. Emily also discovers that the Voice of her Amulet is more sinister than she originally feared.

Book Six: Escape From Lucien
Navin is training with students of the Cielis Guard and despite being appointed a general in Book One, he must prove himself to instructors of the Cielis Guard. Navin and his classmates journey to Lucien, a city ravaged by war and plagued by ghost-like creatures. In Lucien, they search for a beacon that is crucial for their battle against the Elf King. Meanwhile, Emily must go back in time again, this time with Max. Max has learned that Emily released the Voice spell from Trellis’s Amulet stone and asks her to help him as well. He tries to convince them that he is actually fighting for the elf nation and that things still are not as they appear to be.

NOTE: two additional volumes of Amulet have been published since this guide was developed.

Throughout the series readers learn:

In graphic novels, images are used to relay messages with and without accompanying text, adding additional dimension to the story. In Amulet Kibuishi weaves a story, full of emotions and insights through the use of text, image and design. For example:

For more fun or if seeking resources for deeper literary analysis, here are some books/poems similar to Amulet that we’re sure you’ll enjoy.

While this book is written for young readers (with a Grade 2-5), and suggested for elementary school classrooms, it can be incorporated into language arts and content-area classes for a variety of grades. I therefore will be using the Common Core Anchor Standards for College and Career Readiness for Reading, Writing, and Speaking and Listening. Reading Amulet and incorporating the teaching suggestions above promotes critical thinking and its graphic novel format provides verbal and visual story telling across subject areas while addressing multi-modal teaching. Here’s a more detailed look: