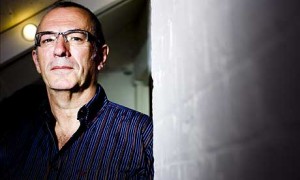 With the appointment of comics creator Dave Gibbons of Watchmen fame as the U.K.’s first Comics Laureate, it seems the rest of the world has finally started to figure out what we already knew: that comics can have a positive role in education.

Similar to the positions of Poet or Children’s Laureate, Dave Gibbons as Comic Laureate will begin a two-year mission this coming February to not only further awareness of the comics medium, but also demonstrate the benefits that comics have for child literacy. As Alison Flood of The Guardian writes, “He will be championing the role of comics in getting children to read as well as visiting schools and attending training events for staff and education conferences.”

Dave Gibbons is the notable artist behind Alan Moore’s seminal work Watchmen as well as several other mainstream series such as Batman and Green Lantern. He has also contributed to the comic anthology 2000 A.D — an anthology noted for showcasing and introducing British talent to the American direct market. Needless to say, Dave Gibbons has a passion for the industry. Along with being recognized as one of the U.K.’s best comic artists, though, he also sees the medium as a “vibrant art form” that is able to play an important and integral role in helping children to learn and to read.

During his two-year campaign, Gibbons’ goal is to demonstrate that although comics come in all forms, it is exactly this variety of subject matter and “range of the medium” that makes them a perfect candidate for use in education. According to Gibbons:

“[Comics] are very accessible. I think children naturally gravitate to their particular mix of brief words and exciting, interesting pictures. They can do everything from spin yarns of derring-do to things which are very educational in the sense of history and science — virtually everything.”

With this newly established honorary role, Dave Gibbons (and other notable contributors in the future) will have the opportunity to take important steps to not only increase social recognition of medium, but also work towards further integrating comics and graphic novels directly into educational systems around the world. Gibbons has been a long-time supporter of CBLDF, and we congratulate him on this honor!