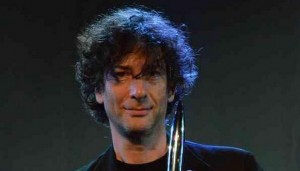 Today in New York City, the National Collation Against Censorship, along with thirty-nine other notable individuals, organizations, and initiatives, will honor award-winning author and comics creator Neil Gaiman the title of 2014 Free Speech Defender.

For their 40th anniversary, at a gala event appropriately called 40 Years of Free Speech, NCAC will celebrate “the artists, authors, students, educators, librarians, lawmakers, celebs du jour, and yes, even corporations, who refused to remain silent on the top threats to free speech in 2014.”

Although Neil Gaiman has won numerous awards and garnered critical acclaim for many of his works, he is also no stranger to censorship and the potential implications that can arise from creating “controversial” books. As Jamie Lovett of comicbook.com points out:

The absolute edition of Gaiman’s masterpiece comic book series Sandman has been listed as one of the top banned and challenged graphic novels by the American Library Association. His critically-acclaimed novel, Neverwhere, was temporarily removed last year from a New Mexico high school after a parent considered one scene “R-Rated.” He has been fighting censorship since a scene he wrote in Outrageous Tales from the Old Testament (1987) nearly sent a publisher to prison.

It is the unique mix of positive reception, a passion for producing books for all ages to enjoy, and his personal battle with censorship that has made Neil Gaiman a powerful advocate for free speech. In a video produced by the publisher HarperCollins for the NCAC event, Gaiman recalls his admiration when he first came to the United States and as an author encountered the First Amendment:

“I loved that this was a whole country in which nobody was going to put you in prison; was going to turn around and stop you from talking. That you were in a county in which the remedy for speech you didn’t like was either not to listen to it or speak yourself.”

He also recalls, though, moments when free speech has been censored and the First Amendment has shown signs of being eroded. It has been this growing series of events as well as his own battles that has fueled Gaiman’s continued fight against censorship and to become an advocate for those who are censored.

Today NCAC, as well as all proponents of free speech, honor Neil Gaiman for his continued work as an advocate of free expression and the positive impact that he has had on protecting reader’s rights. CBLDF is proud to have such a staunch advocate for the freedom to read on our Advisory Board, and we congratulate Gaiman on this well-deserved recognition!

Watch Gaiman talk about free speech in the video from NCAC: