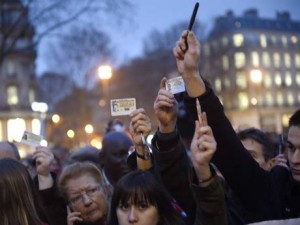 Mourners raise pens and press cards at a vigil in Paris Wednesday night.
© The Independent

Shortly after the attack that killed 12 people at the offices of the French satirical magazine Charlie Hebdo, tributes and musings on free expression flooded the press and Internet. We’ve gathered some of the best and most interesting posts.

Although initial reports on Wednesday said that four cartoonists were among the 12 dead, we learned yesterday that the count is actually five. In addition to Charb, Cabu, Wolinski, and Tignous, cartoonist Philippe Honoré was also shot to death in the editorial meeting.

French police are still searching for two brothers, Saïd and Chérif Kouachi, who have been named as suspects in the attack. A third suspect, 18-year-old Hamyd Mourad, turned himself in yesterday. High school classmates on Twitter protested that he was in class at the time of the attack, however.

Below, we’ve linked and excerpted some of the multitude of articles about the Charlie Hebdo attack that have proliferated since Wednesday.

What is Charlie Hebdo?

Swiss cartoonist Zep produced this piece before it was known that Honoré was also among the dead. God’s comment to Cabu: “For once, you’re early.”

Not to denigrate writing (especially since I do a lot of it myself), but cartoons elicit far more response from readers, both positive and negative, than prose. Websites that run cartoons, especially political cartoons, are consistently amazed at how much more traffic they generate than words. I have twice been fired by newspapers because my cartoons were too widely read — editors worried that they were overshadowing their other content.

Scholars and analysts of the form have tried to articulate exactly what it is about comics that make them so effective at drawing an emotional response, but I think it’s the fact that such a deceptively simple art form can pack such a wallop. Particularly in the political cartoon format, nothing more than workaday artistic chops and a few snide sentences  can be enough to cause a reader to question his long-held political beliefs, national loyalties, even his faith in God.

That drives some people nuts.

Muslims in France and Around the World Condemn Violence

The CFCM represents France’s Muslim community, which is Europe’s biggest and estimated to number between 3.5 million and five million people. The council said in a statement as reported by Agence France-Presse: “This extremely grave barbaric action is also an attack against democracy and the freedom of the press.”

I’m very angry….No, this is not the prophet, [the attackers’] prophet, their hatred, their barbarism, have nothing to do with Islam….They are Satans. They have lost their souls, sold their souls to Hell….We must not concede to them, we must all be strong….

You don’t agree with Charlie Hebdo? [Respond to] drawings with drawings, but not with blood, not with hate.

Satire and Freedom of Expression

If it turns out that members of Al Qaeda or some other radical “Islamic” sect carried out this attack, the saddest, most profoundly ironic thing about it will have been that the satire worked. It did its job. It so threatened its target, cut so deeply at the truth, that it resorted to the most cowardly, most offensive and despicable form of lashing out.

Satire must always accompany any free society. It is an absolute necessity. Even in the most repressive medieval kingdoms, they understood the need for the court jester, the one soul allowed to tell the truth through laughter. It is, in many ways, the most powerful form of free speech because it is aimed at those in power, or those whose ideas would spread hate. It is the canary in the coalmine, a cultural thermometer, and it always has to push, push, push the boundaries of society to see how much it’s grown.

[T]hose guys at Hebdo had [courage], and they were killed for their…cartoons.

A stark reminder that for the most part, the legislators and journalists and institutions that we jab and ridicule are not, in any way, the enemy.

For however frustrating and outraged the back and forth can become, it’s still back and forth – a conversation amongst those on, let’s call it…Team Civilization.

And this type of violence only clarifies that reality.

CBLDF also reached out to Barbara Jones, Executive Director of ALA’s Office of Intellectual Freedom, for her response to the attacks:

“I am so touched by a cartoon I saw today that showed a pencil and stated:  ‘We drew first.’  In the end, the pen is mightier than the sword. Cartoonists, journalists, and those who tried so valiantly to protect them, will continue to be brave, in honor of those who were slain today. Librarians will continue to collect information representing a diversity of views, and encourage communities to discuss ideas instead of killing them.”

• Don’t let murderers pretend their crimes are about cartoons (Vox):

What happened today, according to current reports, is that two men went on a killing spree. Their killing spree, like most killing sprees, will have some thin rationale. Even the worst villains believe themselves to be heroes. But in truth, it was unprovoked slaughter. The fault lies with no one but them and their accomplices. Their crime isn’t explained by cartoons or religion. Plenty of people read Charlie Hebdo’s cartoons and managed to avoid responding with mass murder. Plenty of people follow all sorts of religions and somehow get through the day without racking up a body count. The answers to what happened today won’t be found in Charlie Hebdo’s pages. They can only be found in the murderers’ sick minds.

[M]any of the publications that today honor the dead as martyrs would yesterday have rejected their work as tasteless and obscene, as indeed it often was. The whole point of Charlie’s satire was to be tasteless and obscene, to respect no proprieties, to make its point by being untameable and incorrigible and therefore unpublishable anywhere else. The speech it exemplified was not free to express itself anywhere but in its pages. Its spirit was insurrectionist and anti-idealist, and its creators would be dumbfounded to find themselves memorialized as exemplars of a freedom that they always insisted was perpetually in danger and in need of a defense that only offensiveness could provide.

When an Associated Press spokesperson said the wire service avoided showing Charlie Hebdo‘s Mohamed cartoons because “it’s been our policy for years that we refrain from moving deliberately provocative images,” critics pointed out that the AP image database still contained Andres Serrano’s photograph “Piss Christ” which caused controversy in the 1980s. The AP quickly removed the photo without comment.

Wednesday night, mourners flooded streets in France and around the world. In Paris, about 35,000 people gathered in Place de la République near the site of the attack. Many of them brandished pens, pencils, or press cards in solidarity with the victims.

Index on Censorship, the Comic Book Legal Defense Fund, and PEN America called on all those who believe in the fundamental right to freedom of expression to publish the cartoons or covers of Charlie Hebdo on January 8. The following outlets participated in the protest: