Yesterday’s massacre of twelve people, including five cartoonists, at the offices of the French satirical newspaper Charlie Hebdo have rightfully sparked international condemnation.  An outpouring of speech that includes statements from world leaders, vigils in cities across the globe, the #jesuischarlie hashtag, editorial cartoons, and a range of articles discussing the meritorious or problematic content Charlie Hebdo published is ongoing.  Civil society debates offensive speech, but never silences it with violence.

In the spirit of solidarity for free expression, and recognition of those slain, CBLDF joins Index on Censorship, PEN America, as well as individuals and media outlets around the globe in presenting a selection of work from Charlie Hebdo.  The material is provocative to most, offensive to some, and courageous to others.  It should be the topic of discussion, and should never have been a reason for murder. 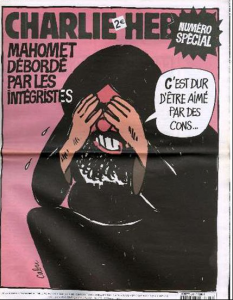 Published in 2006, the headline reads “Mohammed Overwhelmed by Fundamentalism.” In the cartoon, Muhammad weeps as he states, “It’s hard to be loved by idiots,” a comment on religious extremism that has marred Islam. This issue also reprinted the Jyllands-Posten cartoons and then editor Philippe Val was taken to court over allegations that the issue fomented hatred against Islam. Val was aquitted in a decision seen by many as a victory for freedom of the press. 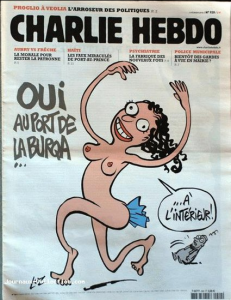 In 2010, Charlie Hebdo expressed support of France’s controversial ban on the wearing of burqas with a cartoon cover that read “Yes, to wearing the burqa … on the inside.” 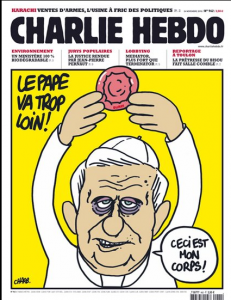 Islam wasn’t the only religion targeted by Charlie Hebdo. Christianity, in particular Catholicism, was often mocked by the magazine. A 2010 cover feature Pope Benedict XVI as he holds a condom over his head, declaring “This is my body,” under the headline “The Pope goes too far!” The cover comments on the Pope’s shifting stance toward birth control, which allowed that the use of condoms is sometimes acceptable, a move that wasn’t popular with some Catholics. 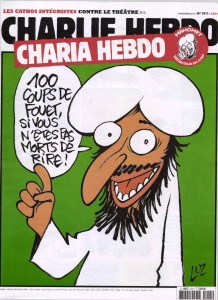 In a 2011 issue, Charlie Hebdo changed its name to “Charia Hebdo,” a reference to sharia, and listed Muhammad as a guest editor. The cover claims “100 lashes if you don’t die of laughter.” Shortly after the issue ran, the offices were firebombed. 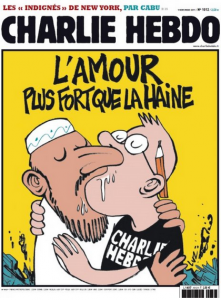 The magazine refused to capitulate to threats, and it published the above cover, proclaiming that “Love is stronger than hate,” a week after Charlie Hebdo‘s offices were firebombed. 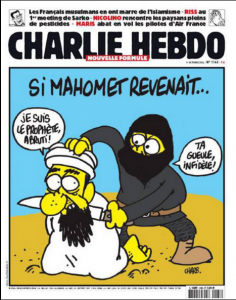 A 2014 cover targeting ISIS extremists, emphasizing the idea that Muhammed himself would not have supported the violent ideology that motivates ISIS and other Islamic extremists. Under the headline “If Mohammad returned…”, Muhammad says “I’m the prophet, asshole!” to which the militant responds “Shut up, infidel!”

This is a small sampling of the controversial cartoons Charlie Hebdo published.  Freedom of expression guarantees their creators the opportunity to compete in the marketplace of ideas.  That marketplace can accept or reject them, celebrate or condemn them.  What it does not do is tolerate violence against those who would voice challenging or offensive ideas.