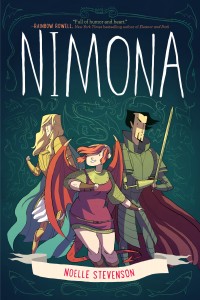 This post takes a look at Nimona by Noelle Stevenson, an award-winning graphic novel and a National Book Award Finalist.

Nimona is about a confident, occasionally snarky, and often inspiring shapeshifter named Nimona who ostensibly serves as supervillain Lord Ballister’s sidekick. Lord Ballister is a disfigured knight who must leave the Institution of Law Enforcement and Heroics after he loses his arm in a joust against Sir Ambrosius Goldenloin. Subsequently, he becomes an evil scientist. His only goals are to defame Sir Ambrosius Goldenloin and to expose and destroy the underhanded and dastardly deeds of the Institution of Law Enforcement and Heroics. Readers, however, soon find out that nothing is as it seems, not even Nimona. Not even good versus evil. Even more fascinating — and engaging — is that the more we read about Nimona and the more we see her in action, the less we know or understand about who or what exactly she is. All we know is that we are constantly rooting for her and can’t quite get enough.

Nimona has received numerous awards and recognition, including being named a National Book Award Finalist. It was nominated for a 2015 Eisner Award and received starred reviews from Kirkus, Publishers Weekly, School Library Journal, and The Bulletin of the Center for Children’s Books. It is also a New York Times Bestseller, and it was awarded Slate’s Cartoonist Studio Prize award. Fox Animation just recently acquired the rights to Nimona for a screen adaptation to be directed by Patrick Osborne. 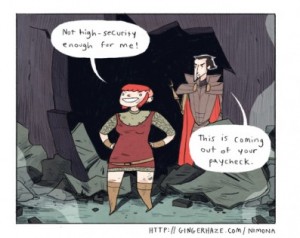 Nimona originated as a two-page art school experiment, which was expanded into a webcomic that has won numerous fans and awards. The story is full of wonderfully balanced and baffling contradictions, from its characters to its settings to the very story itself. Nimona’s story takes place in a world of high-tech weapons and advanced science, a world in which society is run by kings, knights, and the Institute of Law Enforcement and Heroics. This world values science and magic and lives by rules. While we don’t live in that world, we understand it — until Nimona appears and shakes things up.

Reading Nimona is like sitting on the world’s greatest roller coaster. Throughout the book, we’re on the edge of our seats because of Nimona’s constant energy and her creative shapeshifting, and because of Stevenson’s constant twists and turns and perpetual surprises and contradictions. While it starts off as a story of fantasy filled with chivalry and humor, it turns into an intense story in which we learn that nothing is quite as it seems, except the power of love and friendship.

The story begins as Nimona enters supervillain Ballister Blackheart’s lab and introduces herself saying, “The Agency sent me. I’m your new Sidekick.” Ballister, however, doesn’t fall for this. It’s only once he sees Nimona shapeshift (into a shark with boobs) that he has any interest in working with her. 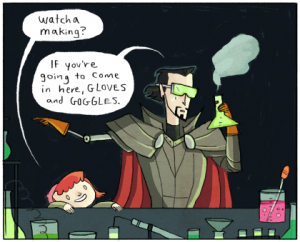 Initially, as Ballister and Nimona plot their misdeeds, Nimona appears to be a typical fantasy of magic, knights, mad science and shapeshifting. It appears to be a story of the petite, red-headed, shapeshifting Nimona and the evil, dark haired, goateed Blackheart’s quest to triumph over the blond, handsome, clean-shaven Sir Ambrosius Goldenloin and the Institution of Law Enforcement and Heroics that he champions. As the story unfolds, however, we realize that nothing is as we assume. Blackheart, for example, believes in science and in rules (which include not murdering or maiming innocents). Nimona, believes evil villains kill people “sometimes” and that, “No one’s gonna take you seriously if you’re too afraid to kill anyone.”

Numerous conflicts drive the story in Nimona. Conflicts exist between Nimona and Ballister, leading us to question who’s the evil villain and who’s the sidekick). Conflicts exist between Blackheart and Sir Goldenloin as they each respectively question their roles and their relationship. While Blackheart and Goldenloin were once close friends, after an “accident” during a joust, in which Sir Goldenloin shot off Ballister’s arm, Ballister realized that Goldenloin was no friend and that “the Institution had no use for a one-armed hero. I took the only other viable option.” 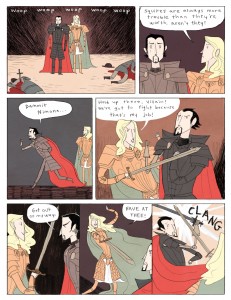 As the story progresses, acts of mischief escalate into battles, and even though Nimona shares pieces of her past, we are no closer to understanding who she is. That, however, doesn’t stop us or even Ballister from finding something really, really endearing about her, even though she is the one who claims to be evil and wreaks havoc all around her.

Nimona is a smart, wonderfully fun romp through friendship, fantasy, expectations, and surprises. For example, Goldenloin’s first words in the book are, “Halt, you villains! Unhand that science!” While it initially feels a lot like Sunday funnies, Nimona quickly breaks the mold, replete with witches, poisoned (or at least germ-tainted) apples, jousts, rivalries, tavern brawls, dragons, magic, science, robots, and aliens. Furthermore, Stevenson’s art is as unique and quirky as Nimona herself. While the beginning of the book is rendered in somewhat simple tones, hues, and images, we see increasing depth to the images and the color palettes by the third chapter, and the images, the designs, the panel layouts take as many risks, jumps, and turns as Nimona herself as it progresses into its fifth chapter. Stevenson’s figures are quirky, with small, triangular heads and distinctive gestures. And while Blackheart and Goldenloin live in a world with rules and clear distinctions, Nimona opens it all up to questions, turning everything and everyone into a whole new ball of wax. Finally, while we all love Nimona for her spunk and snark, we also love Blackheart for his neverending faith in this creature who claims to be evil, but who we never quite believe.

This book is a great read for kids of all ages. I recommend you take the plunge, too. It’s exhilarating! 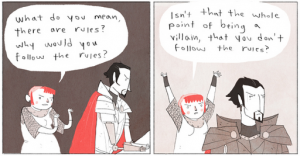 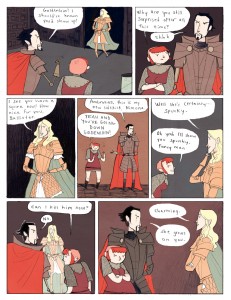 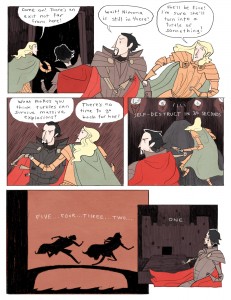 As this book can be used for middle grades and older, when discussing how this book meets CCSS, I will be using the Common Core Anchor Standards for College and Career Readiness for Reading, Writing, and Speaking and Listening to help guide interested educators: