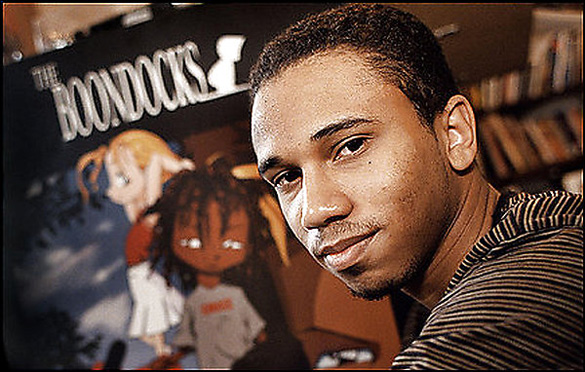 What do you think of when you hear the name Aaron McGruder? To most fans, the mention instantly brings sight to Huey and Riley Freeman, characters from his politically charged comic strip turned smash hit cartoon, and rightfully so. His most recognizable series, The Boondocks is also one of the most recognizably Black works in popular media. “It’s South Park for Black people,” I heard it explained, more than once. But put that aside for a moment, as if we’re playing a game of Taboo and each Boondocks character is on the list of words you can’t say. What do you think of when you hear Aaron McGruder?

Is it “funny”? “Political”? “Pro-Black”? Some hybrid of the three? To me, that question is to ask of his legacy — the principles that are the underpinnings of his work, the adjectives one would use to describe him. And for me, the closest answer I arrive is somewhere between “frightening” and “brave.” Frighteningly brave, perhaps. Let me explain.

We all have unpopular views — some frivolous (Life of Pablo is trash) and some not (Airbnb is bad for the long-term housing economy) — yet most are restricted to those we trust most or live in the safety of Twitter, where we can feel brave expressing our own opinion on other people’s opinions. Even when creators share their book, or film, or anything really, their message often lives between the lines, open for thoughtful discussion, and we applaud the beauty of their subtlety as we discuss brilliant interpretations. Like most people, I find beauty in that subtlety, too. However, I also find it on the opposite end of the spectrum. Writing with a sledgehammer. Saying your opinion, screaming through your characters as though yelling from a mountaintop, and challenging the world to fight you. Even in comedy it’s the path less taken — expression minus any security or deniability, the nudist colony of writing. Could I write that way? It frightens the hell out of me. Am I ever that bold with my own creative work?

Yet that’s how I see The Boondocks. That’s how I see Aaron McGruder. Speaking through creativity with little room to hide, McGruder raised a voice that had been otherwise stifled and welcomed the inevitable controversy. Controversy, in fact, makes up literally 50% of the cartoonist’s Wikipedia page. If McGruder was coming at you, you knew it plain as day — ask popular targets Condoleeza Rice, Bill Cosby, or BET — and if they didn’t defend themselves, newspapers and supporters surely did. From the comic strip’s start in 1999, The Boondocks was being celebrated and suspended by publishers at the same time. We all know where this story goes though: a popular comic became 5 popular books, and popular books turned into a popular cartoon, and a popular cartoon became iconic for its take on social and political issues. Oh, and race. The Boondocks made people uncomfortable. Me, you, everybody.

The Boondocks had a way of forcing us to examine society to see aspects of race relations in America for what they are, in a way few other works have ever shown. Sometimes it was good, sometimes bad, and sometimes downright ugly, but it was always brutally honest with us. Black viewers held our stomachs in laughter at the same time we squirmed in our seats while viewing with a White person. Sometimes the mirror isn’t pretty, but you can trust it not to lie.

I could recount dozens of scenes that serve as my favorite examples, but you likely already have your own (and if you want to recount some of BNP’s favorites you can laugh through The Ten Best Boondocks Episodes of All Time). The Boondocks focused on one of the touchiest subjects of our past century, and we blushed. That blush became a flinch, the flinch becoming a cringe. And during it all we couldn’t stop laughing. That’s what made it so great.

Five books on The Boondocks, three seasons on Cartoon Network’s Adult Swim, Birth of a Nation: A Comic Novel with Reggie Hudlin and artist Kyle Baker, and a currently-running Black Jesus TV series solidifies McGruder as one of the most brilliant and funny writers of our time. Aaron McGruder’s brilliance is — for me, at least — only eclipsed by his willingness to share it unmitigated. His work is frightening brave in a way I hope we can see more in others. In a way I hope I can see more in myself.

Jordan Calhoun is an NYC-based writer, performer, and cereal chef. He is often found running through dark places or freestyling 90s television theme songs. He might solve a mystery, or rewrite history.