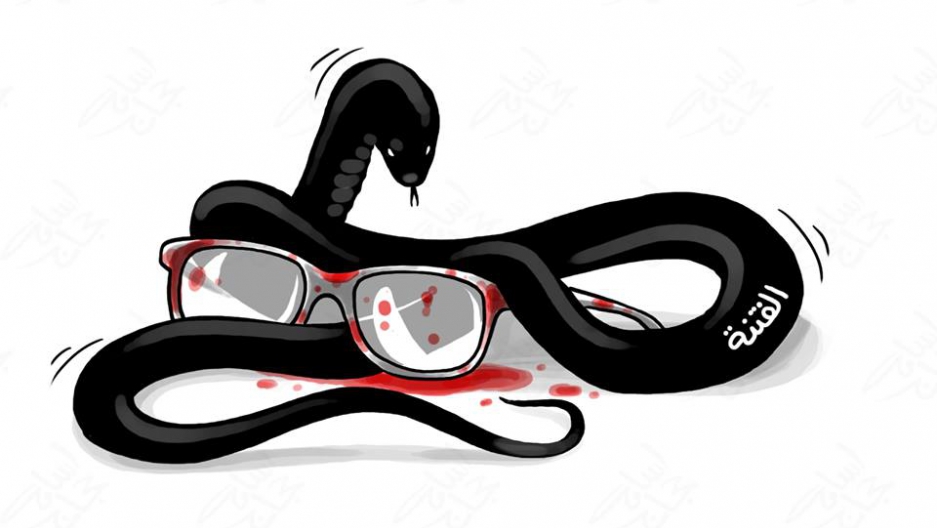 When Jordanian writer Nahed Hattar was shot dead last week outside a courthouse in Amman before the start of his blasphemy trial for a cartoon he shared on Facebook, many Middle Eastern free speech advocates were troubled even if they didn’t agree with Hattar’s views and politics. He held some unpopular opinions to say the least: he was raised Christian in a kingdom that is 97% Sunni Muslim, identified as atheist, staunchly supported the brutal regime of Bashar al-Assad in Syria, and advocated revoking the civil rights of Jordanians of Palestinian origin.

Nevertheless, informed observers largely agreed that both Hattar’s murder and his trial are indicative of a worrying repressive trend in normally stable Jordan. Hattar did not create the cartoon that led to his blasphemy charge; he simply shared it briefly on Facebook before deleting it with an apology to those who were offended. The panel by an unidentified artist depicts an ISIS fighter in bed with two women and ordering God around like a servant. While the cartoon actually skewered the militant group’s well-known hypocrisy regarding observation of Islamic practices, many Jordanians took it as a blasphemous insult to both God and Islam. Hattar’s family and friends have accused Jordan’s government of first legitimizing the suppression of controversial speech with the blasphemy charge, and then failing to provide Hattar adequate (or any) protection despite numerous death threats he’d received in the past several weeks.

For a better grasp on Hattar’s complex case, here are a few enlightening commentaries and analyses written since his death:

Anyone who shares religious satire on Facebook should care about this murder in Jordan (Jonathan Guyer, PRI)

Hattar shared this cartoon on Facebook. We know that cartoonists navigate tricky red lines set by states and violent extremists, and in the Middle East the job has always been dangerous. With social media as a primary platform for communication these days, the risk is rapidly shifting from cartoonists and creators to users and sharers. Hattar’s case highlights the dangers of sharing or re-posting cartoons.

One alarming example — which admittedly is in a different country and on a rather different scale — would be the case of Amr Nohan, the Egyptian military conscript who was convicted for sharing a Facebook meme of a Mickey Mouse president. In both cases, and several others, Facebook is the medium of offense. What can the platform be doing to protect its blasphemers and dissidents? A lot more, I would argue, and free speech advocates should be calling Facebook for comment.

“The murder of Hattar targets democracy and diversity in our society and aims to spread darkness and terrorism,” Nidal Mansour, the president of the [Jordanian] Center for Defending Freedom of Journalists, said in a statement. “Even though we disagree with what Nahed says or writes, this is the time to stand united against terrorism and those who killed him. They want to instill fear and silence us.”

If Jordan is going to fight radicalization and violent extremism, it needs to start by upholding the right to free speech. It is not a question of “rule of law” when the law is used to restrict freedoms. Mr. Hattar’s assassination may be the first time someone was killed for expressing an opinion in Jordan, but if speech continues to be criminalized and vilified the way it is today, it might not be the last.

Many of those who rose to condemn both Hattar’s prosecution and his eventual murder, both inside Jordan and elsewhere in the region, disagreed with some of his more controversial opinions and stances. But as [Jordanian commentator Naseem] Tarawneh explained in his piece, “this is bigger than Nahed Hattar”.

“Whether you’re a moderate or liberal Muslim, a secularist, an atheist, a pluralist or progressive – you too are a minority, and you too are faced with this reality.”

In the aftermath of the murder, Jordanians have proven that they are acutely aware of this reality. Popular Jordanian comedian Ahmad Massad, currently being investigated on charges of contempt of religion, posted to Facebook in Arabic on the day Hattar was killed, wondering whether he will be next. “Will I be killed even if I am innocent of [the charge],” he wrote. “Has the day of judgement been cancelled?! Do the people convict you now?”

← AVAILABLE NOW: She Changed Comics!
Join CBLDF in Seattle This Weekend at GEEKGIRLCON! →