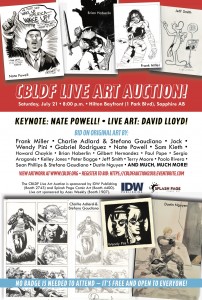 The event kicks off at 8:00 p.m. with a keynote by Nate Powell, artist of the March trilogy and the new graphic novel Come Again. David Lloyd, acclaimed artist of V For Vendetta will be on hand creating live art that will be auctioned off at the end of the night, courtesy of Aces Weekly!

Your bids should be delivered to auctions@cbldf.org by 3:00 p.m. PACIFIC TIME July 21 to be eligible. You will be contacted immediately after the auction with any winning bids.please visit: https://cbldfauction2018.eventbrite.com

About Comic Book Legal Defense Fund
Comic Book Legal Defense Fund is a non-profit organization protecting the freedom to read comics! Our work protects readers, creators, librarians, retailers, publishers, and educators who face the threat of censorship. We monitor legislation and challenge laws that would limit the First Amendment. We create resources that promote understanding of comics and the rights our community is guaranteed. Every day we publish news and information about censorship events as they happen. We are partners in the Kids’ Right to Read Project and Banned Books Week. Our expert legal team is available at a moment’s notice to respond to First Amendment emergencies. CBLDF is a lean organization that works hard to protect the rights that our community depends on. Please support our important work! http://cbldf.org

IDW Entertainment serves as the worldwide distributor of Wynonna Earp airing on the Syfy Channel in the U.S. and is producing BBC America’s Dirk Gently, based on the bestseller by Douglas Adams starring Elijah Wood and Sam Barnett.

About Splash Page Comic Art
Splash Page Comic Art is an original art representative and dealer, who specializes in selling original comic art by modern era artists. We have been representing artists for over 15 years, and take great pride in providing the type of service that we would hope to receive ourselves.

We are very fortunate to represent the original art sales for the following extremely talented artists:

Keep up with the latest CBLDF and SDCC developments by following us on Twitter, Tumblr, Facebook, and Instagram! Or to get updates delivered right to your inbox, sign up for our weekly newsletter at CBLDF.org!