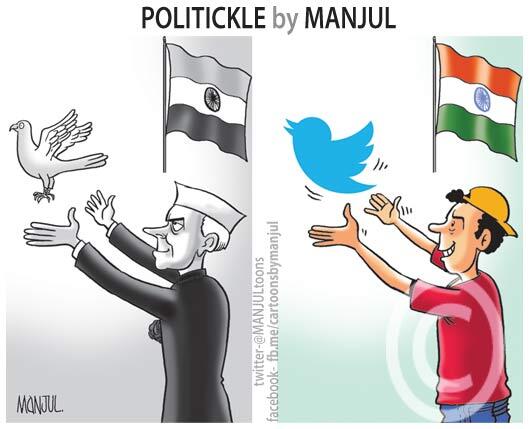 Indian blogs are reporting that two pieces by political cartoonist Manjul were repeatedly deleted from Twitter with no explanation over the weekend, but the cartoons have just as mysteriously been allowed to remain after he posted each of them a third time. Twitter has not responded to queries as of yet, but it appears the deletions could result from a tech issue and not corporate censorship as Manjul initially suspected; numerous users are now complaining that some of their tweets with images attached are being deleted.

Both deleted cartoons dealt with the Lokpal Bill, an anti-corruption measure favored by the ruling Congress party and first introduced in 2011. Manjul first posted one of the cartoons over a year ago and simply reposted it this weekend, while the other was brand new. The panels caricatured Congress party vice president Rahul Gandhi and Kapil Sibal, who heads both the Ministry of Communications and Information Technology and the Ministry of Law and Justice.

If Twitter did delete the cartoons under pressure from the Indian government, it would be a sad change from a little over a year ago, when the company’s General Consul Alexander Macgillivray was hailed in the New York Times as “Twitter’s free speech defender.” At the time Twitter’s commitment to free speech principles seemed much firmer than Facebook’s, for instance, and the company often fought government orders to surrender specific users’ tweets or other information. Unfortunately, Macgillivray left Twitter in August of this year, ahead of its IPO in November, and it’s not exactly clear if anyone else has picked up his free speech torch since then. Stay tuned for updates as we wait for any statement as to what happened this weekend!