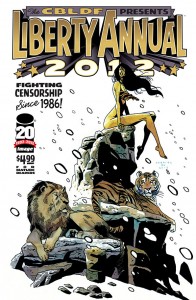 CBLDF Liberty Annual 2012 hits shelves tomorrow, and Comic Book Resources has a sneak peek! Published by Image Comics, the Liberty Annual declares “It’s good to be free!” Image Publisher Eric Stephenson edited this year’s issue, which features stories by some of comics’ hottest creators. This is one spectacular treat for a Halloween new comics day!

All proceeds from the CBLDF Liberty Annual 2012 will benefit the important First Amendment legal work of the CBLDF, a non-profit group dedicated to protecting the free speech of the comics community of retailers, creators, publishers, librarians, and readers. It is available for pre-order now.

Here is the complete list of creative teams (Writer and Artist; one name indicates creator both writes and draws the story):

Check out the sneak peek from CBR here, and don’t forget to pick up your copy at your favorite comic book store tomorrow!

← Tales From the Code: Whatever Happened to the Amazing Amazon–Wonder Woman Bound by Censorship
A History of Censorship, Halloween Edition — My Ears Could Hear the War but the Censors Wouldn’t Let Me Read It →