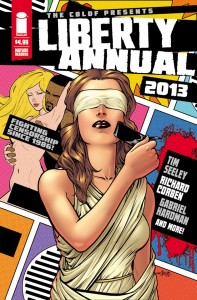 CBLDF Presents Liberty Annual hit shelves yesterday, and early reviews are already singing its praises! When you buy a copy, not only do you get some of the best creators in comics — edited by Dark Horse Comics Editor-in Chief Scott Allie, it features original work from Richard Corben, Gabriel Hardman, Corinna Bechko, Art Baltazar, Franco, Paul Tobin, Emi Lenox, and many, many more — you also support Free Speech!

On Wednesday, October 9, you can join Jeremy Atkins (Charles de Ghoul), Ron Chan (Plants vs. Zombies), Emi Lenox (EmiTown), Michelle Madsen (Buffy the Vampire Slayer), Dave Stewart (Hellboy), and Paul Tobin (Bandette) for an exclusive signing and membership drive  at Things From Another World! TFAW is offering some exclusive goodies for people who join CBLDF during the event:

For details and to RSVP, visit the event page here. 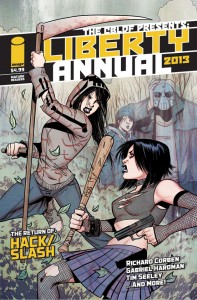 Finally, don’t miss your chance to pick up the extremely limited Hack / Slash variant cover, available only from CBLDF! Limited to 500 copies, this cover will debut during New York Comic-Con, October 10 – 13, at the Javits Center in NYC. CBLDF will be at booth #965 throughout the show. Come early to get your copy of the Hack / Slash variant cover!

← Laptop Searches at the U.S. Border Continue to Cause Concern
Webinar Focuses on the Use of Graphic Novels in Classrooms →