Imagine going on a relaxing vacation out of the country with friends or family, but upon your return to the United States, your laptop is taken from you by border security for what seems to be no reason at all. Frighteningly enough, this is a problem that is becoming more frequent. As we have seen in R. v. Matheson and other cases, it is impacting comic book readers and incriminating them based upon their selection of reading material. Until the Supreme Court decides to face this issue — border searches that are seemingly circumventing the Fourth Amendment — this practice will no doubt continue to happen. 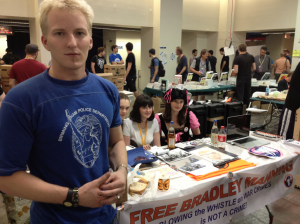 David House, 22, of Boston is just one of the people who have fallen victim to this legal loophole in the Fourth Amendment. In January 2010, House became acquainted with Bradley Manning, who has become infamous for leaking classified documents to Wikileaks. House was greatly inspired by what Manning was doing. As a result, House helped set up an advocacy group called the Bradley Manning Support Network. This move landed him on the government’s radar.

Government authorities suspected that there was a second batch of classified documents that Manning had not yet exposed to the public yet, and they believed that House could have some of this information. In order to gain access to House’s laptop, investigators waited for House to go on vacation to Mexico with his girlfriend. Upon his return at the U.S. Border, they seized his computer. While detaining his computer for seven weeks, they copied every file and keystroke in order to make a full investigation before they returned it to him.

If this doesn’t sound right to anyone, let us take a step back and look at what the Fourth Amendment actually protects us from. The Fourth Amendment is the part of the Constitution that protects us from unreasonable searches and seizures by the government. It generally requires that the government needs to obtain a warrant in order to have permission to search a person or their belongings.

Like most laws, the language of the Fourth Amendment leads to some questions about what it does and does not protect. One major question: What is an “unreasonable search and seizure”? Because of this question, courts have agreed that there are exceptions to the protections of the Fourth Amendment on a case-by-case basis. For example, when authorities determine that the safety of the public is more important than the right of the individual’s privacy, a warrant is not needed for a search. Another exception — one which is currently getting close scrutiny (because it has yet to be faced by the Supreme Court) — is the ability for the government to search the data on laptops without a warrant when people are crossing the United States border.

President Barack Obama and his predecessors have maintained that people crossing into U.S. territory aren’t protected by the Fourth Amendment. That policy is intended to allow for intrusive searches that keep drugs, child pornography and other illegal imports out of the country. But it also means the government can target travelers for no reason other than political advocacy if it wants, and obtain electronic documents identifying fellow supporters.

In theory, the justification for these searches makes sense: It is to protect the country as a whole from an individual who chooses to bring contraband into U.S. territory. Rather than requiring some level of suspicion to justify the searches, the argument that people crossing into the U.S. do not fall under the constitutional protection, so Homeland Security only needs a “hunch” in order to conduct a search of an individual’s computer files. Congress and the White House seem content with letting the Courts eventually decide the issue.

The 9th Circuit attempted to tackle this issue in U.S. v. Cotterman, where it ruled that reasonable suspicion would be necessary in order to conduct a comprehensive search of an electronic device. Reasonable suspicion is a legal standard of proof that is less than probable cause (which is needed to obtain a warrant) but certainly more than a hunch; it needs to be determined by a reasonable inference from specific facts. If that sounds complicated, that’s because it is. Courts are constantly arguing over the exact definition of “reasonable suspicion,” as no one seems to be able to put their finger on what it is. While this is a step in the right direction, this holding is only binding for other cases in the 9th Circuit, which only includes 9 states. 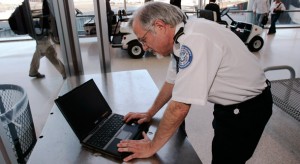 Even more recently, the 6th Circuit faced this issue in U.S. v. Stewart. Theodore Stewart, upon returning to the Detroit from a trip to Japan, was singled out at baggage claim for being “standoffish” and “confrontational.” As a result, he was taken to a secondary inspection area to be questioned and to have the contents of his laptop searched. There were difficulties searching the laptops due to a dead battery and a foreign power cord, so Stewart was permitted to leave but his laptops were further detained. After a partial search, it was believed that the computers contained suspected child pornography and a search warrant was finally obtained. Stewart attempted to suppress all evidence obtained as a result of the search on the grounds that this was an extended border search, which requires reasonable suspicion.

Here, the court held, Stewart was not subjected to an extended border search because his laptop computers never cleared the border – rather, he was randomly stopped and searched at the functional equivalent of a border (the airport), and though he was cleared to enter, his computers were not. As the follow-up, non-forensic examination of the battery-depleted computer occurred one day later at a field office not far from the airport, it remained a routine border search of a laptop. The search was not transformed into an “extended border search” simply because of the distance or short delay before the search continued.

In this regard, the court noted, property remains in the government’s custody while it conducts a customs examination, and may be tested off-site by government or private means until “cleared” for entry. In the court’s view, the initial (non-forensic) search of the computer at the field office was “substantially the same” as that of the other computer back at the airport. The government could not search the second computer at the airport simply because it had no way to power it up – the fact that this required a 20-mile side-trip and 24-hour wait “to perform the same search [] they could have [] the previous day had the proper equipment been present” did not make their routine border an extended border search. Accordingly, not even reasonable suspicion was necessary.

The Stewart decision does not resolve the concerns over border searches, nor does it mean that the searches will be addressed by the Supreme Court anytime soon. From London:

Bottom line, this issue is going to keep coming up, and maybe it’s just happenstance, but they seem to be percolating a little more quickly. Stewart, alas, does not appear on its face to have created any kind of Circuit split on “extended border searches” that might be grounds for Supreme Court review, as the Sixth Circuit joins the seven others that have recognized the doctrine (and, as Stewart notes, the Sixth Circuit had previously applied the doctrine in an unpublished opinion, even if it had not formally “adopted” it before now).

Ultimately, it remains important to protect oneself when crossing borders, whether into the U.S. or into foreign countries. For tips on how to protect yourself, visit CBLDF’s advisory for crossing international borders here.

Special thanks to Ronald London of Davis Wright Tremaine for his contributions to the article.

← Jeff Smith Named To CBLDF Board of Directors
Early Reviews Are In: Get Your Copy of CBLDF Liberty Annual 2013 Now! →