Here are a dozen graphic novels enjoyed by young adult readers that have been challenged or banned!

1. The Graveyard Book by Neil Gaiman and P. Craig Russell

Early in 2015, CBLDF was confidentially involved in the defense of the graphic novel edition of Neil Gaiman’s acclaimed novel The Graveyard Book, which was illustrated by P. Craig Russell. A complaint was filed over violent imagery in the graphic novel, but CBLDF advised that the book was appropriate for the middle school library where it was challenged. The review committee that examined the book affirmed CBLDF’s stance and kept the book in the library. More… 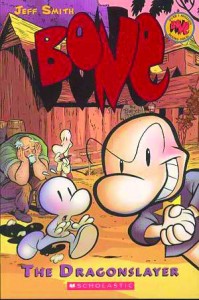 Although considered a modern comics classic that’s delighted millions of readers all over the world, Bone is also one of the most commonly challenged books in American libraries. In April 2010, a Minnesota parent petitioned for the series’ removal from her son’s school library over images she believed to be promoting drinking and smoking. The challenge was ultimately rejected by a 10 to 1 vote. In 2011, the entire series was removed from classrooms and libraries in a New Mexico district with no oversight or review process. In early 2014, the ALA’s Office for Intellectual Freedom posted their annual list of the ten most-challenged books. The list had many of the usual suspects and one not-so-usual suspect: Bone secured the rank of tenth most challenged book of the year for “political viewpoint, racism, violence.” Two of the challenges that put Bone on ALA’s list took place in Texas, but both school districts​ reviewed the books and opted to keep the series. More…

The ban that landed Raina Telgemeier’s middle-grade graphic novel Drama on ALA’s frequently challenged books list for 2014 was at Chapel Hill Elementary in Mount Pleasant, Texas. The ban was reported in the Texas ACLU’s “Annual Banned Books Report,” but there has been no news coverage, so details are thin. What is known is that the book was challenged as “sexually explicit,” most likely for a kiss between two male characters.

Drama was removed from the elementary school’s library, but three copies remain in Chapel Hill Independent School District’s combined middle / high school library. The school board policies do not list a formal challenge policy, but there does appear to be some sort of review process because district documentation contains a challenge form, as well as an assessment form for use by a review committee. Further, it is unknown whether the district actually followed its review process, but it seems unlikely that a review committee would objectively agree that the book is “pervasively vulgar,” one of the stated criteria for removal of library materials in district policy. More…

4. This One Summer by Jillian Tamaki and Mariko Tamaki

The announcement of the 2014 Caldecott Medal winner and honorees had many people rushing to pick up the books for their library and classroom collections. Graphic novel This One Summer by Jillian Tamaki and Mariko Tamaki broke boundaries by becoming the first graphic novel to earn the Caldecott honor. Unfortunately, the award yielded an unforeseen negative outcome: Since the announcement of the Caldecott honor, CBLDF has been confidentially involved in defending multiple challenges to This One Summer in various communities.

The Caldecott award is given to books intended for children up to age 14. This One Summer is intended for ages 12 and up, which makes it eligible for the Caldecott, but books for that age group rarely receive the award. Problems arise when people order a book based on its award pedigree rather than familiarity with the content of the book. A few people, believing the book is aimed at younger readers because it is a Caldecott Honor Book, have been shocked to find that the award winning graphic novel is meant for audiences age 12 and up. Rather than acknowledging their responsibility for knowing the material, some of these individuals instead attacked the book. More…

The books were placed under formal review after the parent of a 9-year-old who checked the book Dragon Ball: The Monkey King out of the Pittsville Elementary and Middle School library filed a formal complaint over nudity and violence in the book. The review committee recommended that the books in the Dragon Ball series, which are listed by the publisher for ages 13+, be removed from the entire public school library system, including at the high school level. School officials acknowledged the value of graphic novels in their libraries, and indicated that they would embark on “instituting more focused and ongoing professional development training on the selection of media materials and additional procedures to handle student requests for media books and resources.” More… 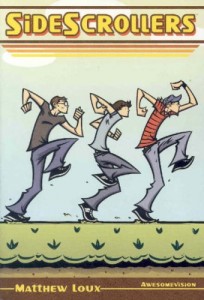 Matthew Loux’s SideScrollers recounts the adventures of three teenaged slacker geeks who are roused to action when a female friend becomes romantically involved with a loutish quarterback. Along the way, the trio engages in mildly vulgar but realistic banter and vandalizes a car with anatomically correct graffiti. The video game-themed graphic novel was removed from a Connecticut school district’s ninth grade summer reading list after a woman in the community complained about profanity and sexual references. The woman, who did not have children in the school system, claimed that her effort to remove the book was “not a question of censorship,” even though the book was not required reading and students could simply chose a different book. It is unclear whether the Board of Education followed its own challenge policy, which states that “no parent nor group of parents has the right to negate the use of educational resources for students other than his/her own child.” Further, the board also changed its policy so that a committee must approve reading lists drawn up by schools. More…

In 2014, the book was challenged in Oregon’s Three Rivers School District for violent imagery. It was also challenged in Illinois’ Ball-Chatham school district and the Smithville, Texas, school district over the depiction of Muslim faith. All three challenges failed, but they helped earn Persepolis the number two spot on ALA’s frequently challenged list. In 2015, it was subject to a rare higher education challenge at Crafton Hills College in California. More…

8. The Color of Earth by Kim Dong Hwa

When the American Library Association’s Office for Intellectual Freedom released their list of the Top Ten Most Frequently Challenged Books of 2011, the second-most challenged book on that list was The Color of Earth, a critically-acclaimed Korean manwha, or comic book, series. In spite of numerous positive reviews from Booklist, Publishers Weekly, The School Library Journal, and other outlets that praise the book as “richly literate and imaginative” (Booklist) and “a work of great humanity” (Publishers Weekly), the coming-of-age tale is challenged due to nudity, sexual content, and suitability for age group. More…

Art Spiegelman’s acclaimed graphic novel Maus focuses on a son’s quest to learn about his father, a Polish Jew who survived the Holocaust. Spiegelman famously depicts each ethnic group as a different animal: Jews are drawn as mice, Germans as cats, Poles as pigs — a narrative technique that purposely cannot sustain itself when there is a question about a character’s specific race. Despite its accolades and critical praise, Maus has been challenged for being “anti-ethnic” and “unsuitable for younger readers.”

In one instance, the book was challenged at the public library in Pasadena, California, by a man of Polish decent who was offended by the portrayal of his nationality. The challenge failed, and librarian Nick Smith said, “The thing is, Maus made him uncomfortable, so he didn’t want other people to read it. That is censorship, as opposed to parental guidance.”

In a strange turn of events, the book was recently pulled from bookstores in Russia because a swastika appears on the cover — a poorly worded law forbids the display of anything that could be considered Nazi propaganda in the country. More…

10. Pride of Baghdad by Brian K. Vaughan and Niko Henrichon

Pride of Baghdad follows a pride of lions that escapes from a Baghdad zoo after an American bombing as they struggle to survive on the bombed-out streets of the city. The tale is based loosely on true events. Despite making both ALA’s Great Graphic Novels for Teens Top Ten in 2007 and Booklist Editors’ Choice: Adult Books for Young Adults as well as featuring non-human main characters, Pride of Baghdad is frequently challenged for alleged sexually explicit content.

Despite challenges, the book remains available in libraries around the country. It is often praised for the ways in which it comments on the effects of war on civilians and its commentary on freedom. Vaughan himself told Neal Conan with NPR that he focused on the lions as a way to help his audience connect with the characters: “I sort of wanted, you know, to tell a story from the perspective of non combatants. And I think it’s really hard for Americans — for any of us to sympathize with that other — you know, whether it’s another race or creed or nationality. But because animals transcend that, you know, I was hoping they would sort of bridge the emotional gap. And, you know, we can sort of sadly feel for animals in ways that we can’t feel for that other.” More…

At the time of the challenge, the Marshall Public Library did not have an established materials selection policy, which would have laid out guidelines as to what types of items the library should buy. The library board decided to draft such a policy, but also opted to remove the two books from circulation during the development process. After several months, the board ultimately approved a policy, which stated in part that the library would buy materials based on contemporary or social significance, critical acclaim, patron requests or popular demand, and “timeliness and/or significance of subject matter.” More…

CBLDF took immediate action to help defend the book, taking the lead with frequent partners Kids’ Right to Read Project in sending a letter to Superintendent V. Sue Cleveland to protest the allegations against Palomar. By a 5-3 vote, the Rio Rancho review committee voted to retain the book. Although Palomar is slated to return to shelves for the 2015-2016 school year, the district has imposed a requirement for students under 18 to have parental permission to access it. More…