From Nelvana of the Northern Lights, a female crime-buster who predates Wonder Woman, to a Nazi-fighting man from the sea called Iron Man, Canada’s comics history is rich, vibrant, and has a flavor wholly its own. Former award-winning math professor and comic shop owner Eddy Smet celebrates his home country’s comics heritage by continuing the tradition of donating portions of his own personal collection of comics to Western University in Ontario, Canada, giving new generations of students and comics fans the opportunity to read and learn about the books that helped build Canada’s own unique comics industry.

Since 2009, Smet has donated over 10,000 comics from his collection to the archival research department at Western. The first donation — a collection worth six figures — included not only copies of Frank Miller’s infamous Daredevil run and Alan Moore’s complete Watchmen series, but also several issues of Canada’s own Captain America-style superhero, Captain Canuck. This past October, Smet donated another 588 comics to the school, but included in this donation were some of the rarest and most unique comics ever published in Canada — the “Canadian Whites.”

So called for their strictly black-and-white interiors, these domestic comics from the 1940s were the product of an industry suddenly barred from importing and distributing American periodicals to Canadian comics readers. In 1939, when Canada declared war against Germany, the Foreign Exchange Board was founded to monitor and regulate what foreign materials were imported into the country. The first items cut by the board were the “non-essential goods.” “Among the items banned were fiction periodicals, a category that encompassed pulps and other newsstand magazines, including comic books,” notes the Canadian Library of Archives. With the inability to fill Canadian newsstands with four-color creations from the U.S., publishers like Maple Leaf and Anglo-American used the opportunity to develop their own new and original content. From there, the Canadian Whites and the Golden Age of Canadian comics were born. As the Library of Archives notes, “the government had inadvertently laid the groundwork for a Canadian comics industry” in its attempt to regulate the consumption of foreign materials. 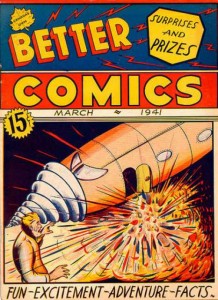 Because of the embargo, Canadian publishers created series like Better Comics — the series credited as being the first wholly original Canadian White — along with notable characters like Nelvana and Captain Canuck. Similar to the trajectory of the United States comics industry, post-WWII saw the boom of less superhero-centric and more thrilling and adventure-style comics. Moreover, although American periodicals still couldn’t be imported into the country after end of the war, rights could be bought to reprint many of the comics that would lead to the infamous Comics Code and censorship of the American comics industry.

Although it wouldn’t be until 1954, when the U.S. Senate Subcommittee Hearings would present the case about the adverse effects of crime and horror comics on children, censorship groups in Canada were much quicker to react to the influx of American comics into their country. In 1949, the Canadian Senate passed the Fulton Bill, a revision of Section 207 of the Criminal Code that dealt with obscenity, resulting in the censorship of all crime comics in Canada.

The Fulton Bill ultimately led to the formation of the Comic Magazine Industry Association of Canada (CMIAC) — an organization similar to the Comics Code Authority in the U.S that likewise tried to regulate the horror and weird comics not currently being censored by Canadian law. When the Korean War started in the early 1950s, though, the restrictions on importing American periodicals were lifted, and Canadian newsstands were flooded with American crime, horror, and war comics in all of their four-color glory. With the increase in American comics coming into the country, domestically produced publications were pushed off stands. Canadian publishers had no way to keep up with the deluge of American comics, so Canadian Whites became relics of another time.

With the formation of the Comics Code Authority in 1954, the unfettered American horror and crime comics of which the Canadian marketplace had grown fond no longer existed. In the span of less than two decades, the Canadian comics industry faced three major contractions: the first being their own censorship laws against crime comics; the second being the literal replacement of Canadian comics by American imports; and the third being the second-hand effects of censorship in America that stifled the kinds of books that could be produced and, by extension, imported into Canada.

The Golden Age of comics may had ended in both Canada and the U.S., but much like other pre-Code publications in the U.S., issues of Better Comics and Captain Canuck became classics coveted by Canadian collectors, including Smet. Smet’s most recent donation to Western University includes a rare copy of Better Comics #1, along with 100 other copies of various Canadian Whites.

“It’s like cutting off my own arms because I’ve been collecting for more than 40 years,” said Smet about his initial donation in 2009, “but I know giving my collection to a place like Western will provide a wonderful resource for students and faculty who are studying pop culture, visual arts or even women’s studies.”