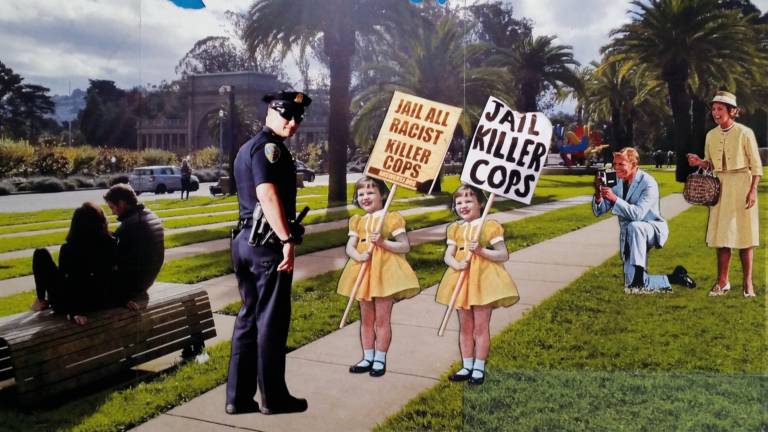 A school district in San Jose, California removed a Black History Month art exhibit from its administrative offices only a few hours after its installation last week, citing complaints from parents who were offended by artist Mark Harris’ mixed-media collages. Although the East Side Union High School District offices have for many years hosted annual exhibits of “artifacts” from Black history, Superintendent Chris Funk said that Harris’ work exploring civil rights, institutional racism, and police violence is too political to be displayed in the same space.

The annual Black History Month exhibits are organized by a group of parents and community members called the African American Student Advocates, led by local pastor and NAACP leader Jeff Moore. Exhibits in past years have featured items from the personal collections of Moore and other community members, but this year Moore found Harris’ “State of Denial” series to be timely and invited the artist to exhibit 11 of his works.

In an interview with KQED Superintendent Funk accused Moore of not being “upfront about what his motives were,” but Moore counters that it did not occur to him that this year’s exhibit would be seen as any more or less “political” than those of past years, which have featured “figures like Frederick Douglass, Malcolm X and President Barack Obama.” Harris also rejected the idea that his work adopts a particular political perspective, rather than simply expressing the lived experience of many African Americans:

My artwork expresses the real visceral outrage that a lot of African Americans have about the violence we’re still subjected to in the 21st century. For centuries, we have been told not to speak out about it. You don’t have to like [the art]. It’s not only my history. This is American history.

The National Coalition Against Censorship and the ACLU of Northern California sent the district a letter objecting to the removal and pointing out that hosting an art exhibit does not mean that the venue necessarily endorses the views presented. In an attempt to compensate for removing his work from display, ESUHSD has invited Harris to hold an art lecture for students and the public next Wednesday, February 15. The letter urges the district to go much further and reinstate the exhibit in full, perhaps along with a disclaimer and/or artist’s statement.

This case is just the latest example of censorship aimed at similarly-themed artwork in public institutions. Here are some more from the past several years: