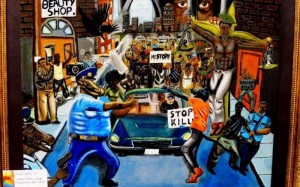 CBLDF has joined a coalition led by the National Coalition Against Censorship to condemn the removal of a student’s painting from an exhibit in the U.S. Capitol.

“At a time of nationwide concerns about the future of our free speech protections, this decision is deeply disturbing,” said NCAC’s Director of Programs Svetlana Mintcheva. “We urge the Architect of the Capitol to place the core national value of free speech over and above partisan strife.”

The untitled painting by 18-year-old David Pulphus had ignited a figurative tug-of-war in which Missouri Rep. Lacy Clay had to restore the painting on multiple occasions after other legislators in the building took it upon themselves to take the painting down.

The painting is just one among dozens of student artworks from across the country selected to hang in a corridor of the Cannon House Office Building for one year as part of the Congressional Art Competition. Pulphus’ work depicts a protest march foregrounded by a police officer aiming his weapon at an unarmed subject. At least one officer in the painting is shown with the head of a boar, while his target appears to be a wolf or black panther. Also prominently featured in the painting is a young African American man crucified on the scales of justice, and protest signs such as “RACISM KILLS.” Pulphus completed the painting while he was a student at Cardinal Ritter College Prep High School in St. Louis.

The painting had hung more or less unnoticed for six months before Fox News’ Eric Bolling urged viewers to call Rep. Clay or their own Congressional representatives to demand that the painting be taken down. Clay staunchly refused to censor the work, but Speaker of the House Paul Ryan formally requested that the painting be removed by the Architect of the Capitol, who oversees the buildings and grounds. Ryan claimed that Pulphus’ work does not conform to one of the art competition’s rules barring “exhibits depicting subjects of contemporary political controversy or a sensationalistic or gruesome nature.”

NCAC addressed the chilling effect the removal of the painting will have on expression in their statement:

Political artistic expression is protected speech, no matter how controversial or offensive some may find it. Criticism of government actors such as law enforcement officials is one of the foremost reasons why we have the First Amendment. Citizens’ freedom to speak out against perceived governmental abuses and injustices is necessary to the health of our democracy: were government able to silence such criticisms, meaningful political discourse would be rendered impossible.

Removing the work sends a message to young people — and everybody else — that they should not depict the world around them for fear of offending our political representatives. At a time when we have a new administration and nationwide concerns about free speech, the censoring of an artwork because of its viewpoint is a deeply disturbing and divisive act in an already polarized nation.

You can view NCAC’s press release and the full statement below.

Help support CBLDF’s important First Amendment in 2017 work by visiting the Rewards Zone, making a donation, or becoming a member of CBLDF!