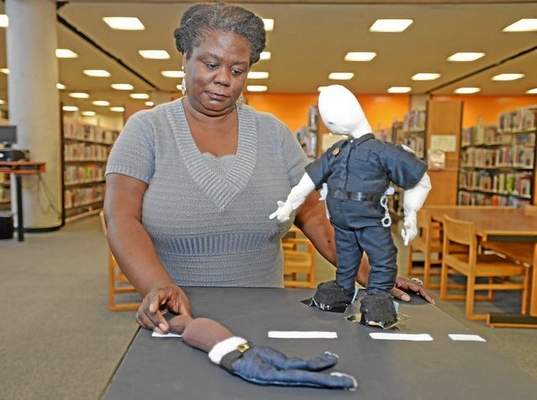 Citing a “misunderstanding,” the Long Beach, California public library yesterday invited local artist Lethia Cobbs to return a doll that a library employee had told her to remove from her artwork earlier this month. The piece includes a white police officer standing over an armless–literally “unarmed”–black man lying on the ground.

The police tableau is just one of ten pieces in Cobbs’ exhibit “Dollandia” which is currently installed in the city’s main library. The rest of her work on display is far from controversial, according to the Press-Telegram newspaper: “mermaids under water, a girl studying at a table and a couple lounging at the beach.” Explaining her inspiration for the piece, Cobbs said, “I make cute dolls, things people put on their shelf, but I wanted to make something that’s not cute.” Moreover, she says artists were even encouraged to move in the “edgy [and] provocative” direction at a library-sponsored workshop for those hoping to secure a spot in the public display rotation.

But when Cobbs was installing “Dollandia” early this month, the library’s coordinator for the art displays told her to remove the armless black doll because the commentary on police shootings was “too controversial” and “would offend certain segments of the public.” For most of the month of January–half of Cobbs’ allotted exhibit period–that display case contained only the white officer pointing his gun-shaped hand at empty space.

No library representatives would comment before the Press-Telegram ran its original story last week, and city spokesperson Kerry Gerot said only that “our preliminary information indicates that this exhibit was installed and modified by one individual without the knowledge or approval of superiors.” Gerot was apparently referring to exhibit coordinator Elizabeth Rogers, who told Cobbs to remove the doll.

The same day that article appeared in the newspaper, however, someone from the library contacted Cobbs and asked her to restore the doll to the artwork. Library Director Glenda Williams was present when Cobbs brought the doll back, but refused to elaborate for a Press-Telegram reporter as to why the exhibit was censored in the first place.

Cobbs says she is satisfied that she was able to restore the piece as she originally intended it, but she’s also concerned that the library now says it will review the art selection process. She told the Press-Telegram:

They said the situation will make them look at the process of submitting work…they will accept for future exhibits. I don’t know what that means. You can infer all sorts of things from that. If it means they will be restricting artists in the future, it makes me sad. They should welcome something to have a discussion about.

Cobbs also rightly pointed out the irony of the library having a banned books display near her exhibit that was censored. As library staff begin drawing up the exhibit policy, this seems like a prime opportunity to uphold a fundamental value of the profession by unequivocally supporting freedom of expression!