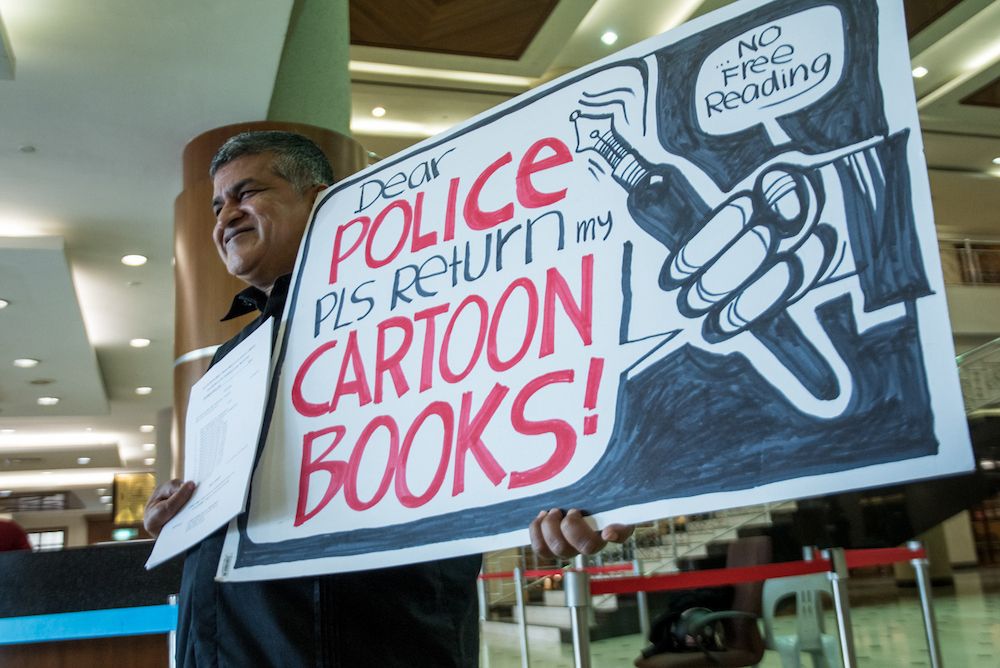 Once again, Malaysian political cartoonist Zunar has filed a lawsuit against police seeking the return of books and t-shirts that were seized in a raid of one of his public fan events. He also wants to recoup lost sales of about $5200 for the merchandise taken from his “Tea with Zunar” fundraiser last December.

Although Zunar has been harassed by police for years due to his cartoons and currently is awaiting trial on ten counts of sedition, he has won some judicial victories in the past. Most recently in April of this year, a court awarded him damages for books and original art that were seized in 2010. The wait for a resolution in this newest suit is likely to be just as long, but his lawyer N. Surendran explained in a statement yesterday that any future raids will be met with the same response:

If again, in future Zunar does another exhibition, whoever tries to do this again, be it the police or anybody else, we will take you to court and you will have to answer to the court. There will be no more tolerance for this kind of unlawful behaviour against a person whose only crime is to criticise the authorities. That is the democratic right of every Malaysian.

Zunar and two of his employees were arrested at the December tea and questioned for eight hours on suspicion of “activities detrimental to parliamentary democracy” before being released on bail. Two fans in attendance were also arrested for filming the police as they descended on the event.

Apart from the police harassment, Zunar has also recently faced serious threats from the youth wing of ruling party UMNO, whose members formed a mob that shut down an exhibit of his work last November. Ironically the only arrest following that incident was of Zunar himself, after UMNO Youth filed a complaint against him for “intentionally humiliating a person”–that person being Prime Minister Najib Razak, who naturally features prominently in his political cartoons.

Prior to those two arrests in quick succession last year, Zunar was already facing nine counts of sedition which stem from statements that he made on Twitter in February 2015 following the sentencing of opposition leader Anwar Ibrahim on a trumped-up sodomy charge. The cartoonist hinted that the judiciary in that trial had been subject to political pressure or bribery, observing that “the lackeys in black robes are proud of their sentences. The reward from political masters must be plenty.”

He then exchanged Twitter barbs — and a cartoon — with Inspector-General of Police Khalid Abu Bakar as officers were en route to arrest him. His trial has been delayed multiple times, but is currently scheduled for November; if convicted, he could face up to 43 years in prison. The government also has barred him from leaving the country until his case is resolved.