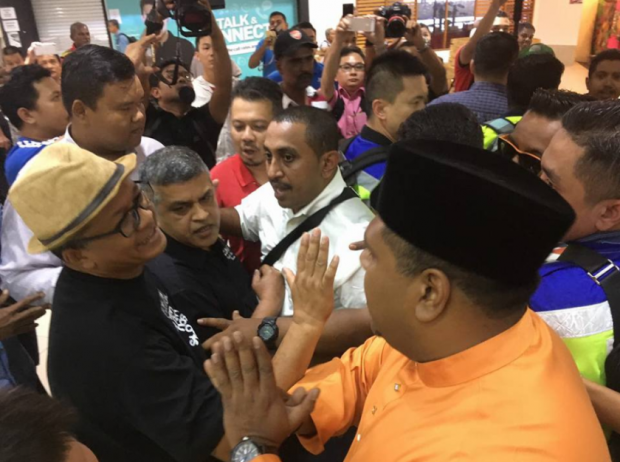 It’s been an eventful weekend for Zunar, the Malaysian political cartoonist facing nine separate charges of sedition which could net him up to 43 years in prison. First, on Friday his new cartoon exhibit was stormed by an angry mob of government supporters displeased by his frequent criticism of Prime Minister Najib Razak. Riot police were called in to disperse the crowd, but yesterday representatives of the ruling party UMNO lodged a formal complaint against Zunar, who was then arrested on yet another sedition charge as well as a charge of “intentionally humiliating a person.” He has now been released after posting bail.

Zunar’s latest two-day exhibit was being held in conjunction with the George Town Literary Festival in the state of Penang, an opposition stronghold north of Kuala Lumpur. Festival organizers issued a strong condemnation of the arrest on their website and posted several updates under the heading “GTLF Zunar Solidarity Watch” on their Facebook page, including an announcement that the book launch for his latest collection Wasabi would go ahead with or without him — although it would turn into a silent protest if he was not able to be there.

A columnist for the news site Malaysiakini noted the upside-down nature of the entire affair, drawing on Lewis Carroll to note that “we have truly entered Wonderland, where the queen of the people’s heart goes, ‘Off with their heads’, and the thugs who run amok lodge police reports after the fact, and the victim is arrested for provoking the attackers.” After being released on bail, Zunar told Malaysiakini that “this incident is too cartoonish that I do not know where to start to draw (about it), but I will definitely do a series to explain the whole situation.”

International human rights organizations including Amnesty International and the Jimmy Wales Foundation also condemned the latest arrest, which came just days after it was announced that Zunar’s second appeal to overturn Malaysia’s Sedition Act on constitutional grounds will proceed in January. He is also currently fighting a police order that bars him from leaving the country.

The nine sedition charges that were already pending stem from statements that Zunar made on Twitter last February following the sentencing of opposition leader Anwar Ibrahim on a trumped-up sodomy charge. The cartoonist hinted that the judiciary in that trial had been subject to political pressure or bribery, observing that “the lackeys in black robes are proud of their sentences. The reward from political masters must be plenty.” He then exchanged Twitter barbs — and a cartoon — with Inspector General of Police Khalid Abu Bakar as officers were en route to arrest him.

The criminal trial for those charges has been delayed several times partly due to Zunar and his lawyers’ challenge of the Sedition Act, implemented during the British colonial era and before Malaysia had its own constitution, on the grounds that it “contradicted the constitution’s guarantee of free speech.” The High Court disagreed and said it had already addressed the question in rejecting a previous challenge by law professor Azmi Sharom, also charged with sedition. In February, however, Attorney General Mohamed Apandi Ali withdrew the sedition charge against Azmi, which had been pending since 2014.