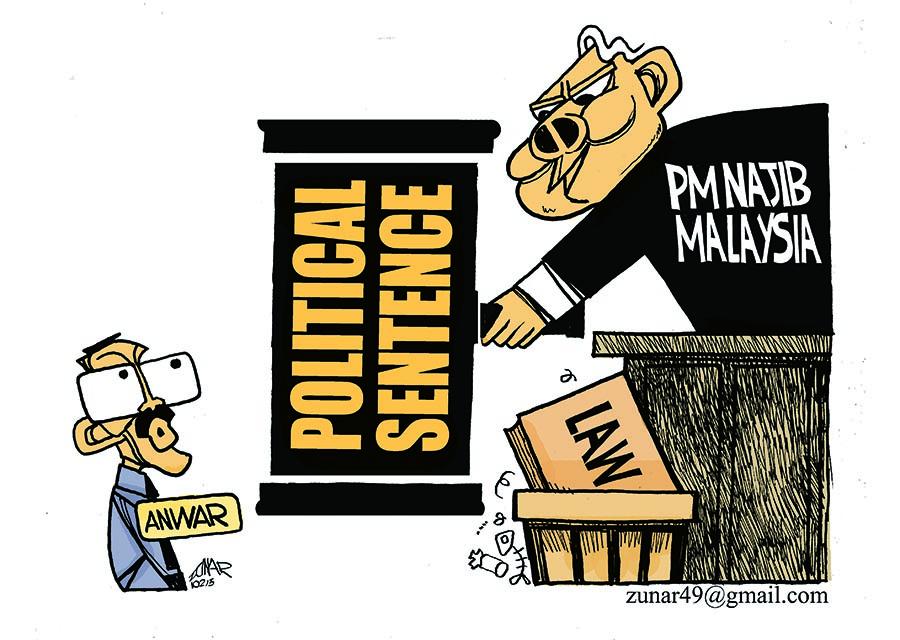 Malaysian cartoonist Zunar is currently imprisoned, awaiting questioning over a tweet he posted this week suggesting that the country’s judiciary is corrupted by political or financial influence. He issued the criticism just after the internationally condemned sodomy conviction of former Deputy Prime Minister Anwar Ibrahim was upheld in Federal Court.

Anwar, a top leader in a coalition opposing Prime Minister Najib Razak and his ruling party UMNO, is sentenced to five years in prison plus another five years’ suspension from politics. At 67, his political career is likely finished — which Zunar and other critics of UMNO maintain was the goal all along. Zunar’s latest book of cartoons, The Conspiracy to Imprison Anwar, is entirely devoted to the case, which has dragged on for several years.

Shortly after the country’s highest court ruled against Ibrahim on Tuesday, Zunar said via Twitter that “the lackeys in black robes are proud of their sentences. The reward from political masters must be plenty.” Inspector-General of Police Khalid Abu Bakar pounced, retweeting Zunar’s comment with the observation that “this person…wants action to be taken by [police]. PCIRC please detect and investigate.” The acronym designates the Police Cyber Investigation Response Centre.

Knowing his arrest was likely imminent, Zunar posted the above cartoon, which shows Najib handing down a “political sentence” to Anwar. He then responded directly to Khalid: “Hope you can catch thieves through Twitter.” Zunar was arrested on a sedition charge at his home around 9:00 p.m. Tuesday and is being held for three days, despite his lawyer Melissa Sasidaran’s protest that police could easily complete whatever questioning they feel is necessary in one day. They have already seized his phone, she pointed out, and there is no more “evidence” to be collected since the alleged crime happened on Twitter. Nevertheless, police even have the option to extend his detention when the initial three-day period expires on Saturday.

Before the latest sedition charge, Zunar was already under investigation for his cartoons. Just a few weeks ago police raided his office without a warrant while he was out of the country, seizing about 150 books. His current detention is just the newest chapter following years of government harassment and intimidation directed not only at the cartoonist himself, but also at his customers, employees, printers, and the retailers who dared to carry his books. He has cheerfully borne up under the pressure, insisting over and over that only cartoons can do justice to Najib’s form of governance.

After Zunar’s arrest, his wife Fazlina Rosley said he will certainly not be silenced now: “Of course this is a form of intimidation, with the purpose that society does not question the authorities. Zunar will not bow down to this intimidation. He will continue to criticise even if he remains in jail.” CBLDF calls upon the Malaysian government to free Zunar and end the harassment immediately!