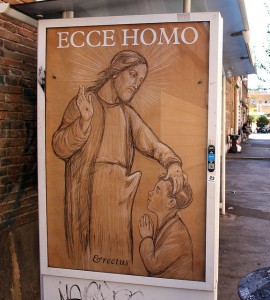 An Italian street artist who goes by the pseudonym Hogre is facing a blasphemy charge over a poster of a pedophilic Jesus that briefly hung in a Rome bus shelter this summer. The poster titled Ecce Homo Erectus was a commentary on Australia’s Cardinal George Pell, the latest high-ranking Catholic official charged with child sexual abuse.

Hogre’s preferred form of street art is “subvertising,” in which the artist replaces or subtly modifies public advertisements in order to critique consumer culture or societal issues. Sometime in late June, Hogre and fellow pseudonymous artist doublewhY managed to hang two of their works inside plexiglass frames designed to hold ads in several Roman bus shelters. One of the posters was Ecce Homo Erectus; the other was doublewhY’s Immaculata Conception in Vitro, which shows two women holding a baby while one of them flips off the viewer.

Unsurprisingly, the posters made quite a stir when they suddenly appeared in the bus shelters. Authorities first threatened vandalism charges against the artists if they could be identified–a risk that most street artists assume as a matter of course. But once police actually managed to track down Hogre through friends, they unexpectedly invoked Article 404 of the Italian penal code: “offense against a religious faith through contempt.”

Italy’s antiquated blasphemy law is rarely used, but the Union of Rationalist Atheists and Agnostics says that it also exerts a substantial chilling effect, causing visual and performing artists to pre-emptively self-censor. If convicted, Hogre could be fined up to €5000 (about $5800) or even sent to prison for up to two years. Police have also made clear that they intend to charge doublewhY if they can track down the person behind the pseudonym.

Hogre’s case is exceedingly rare in a democracy, but artists in monarchies and repressive regimes have more frequent run-ins with blasphemy laws. Most recently, Jordanian cartoonist Emad Hajjaj is under investigation for a cartoon which also features Jesus–on the cross, denouncing the leader of the Greek Orthodox Church in Jerusalem because he sold land to Israeli developers. A legal complaint filed against Hajjaj said the cartoon was offensive both to Jordan’s Christian minority and to some Muslims, who object to the depiction of any prophet of Islam and to the suggestion that Jesus was crucified, which is not a tenet of their faith.