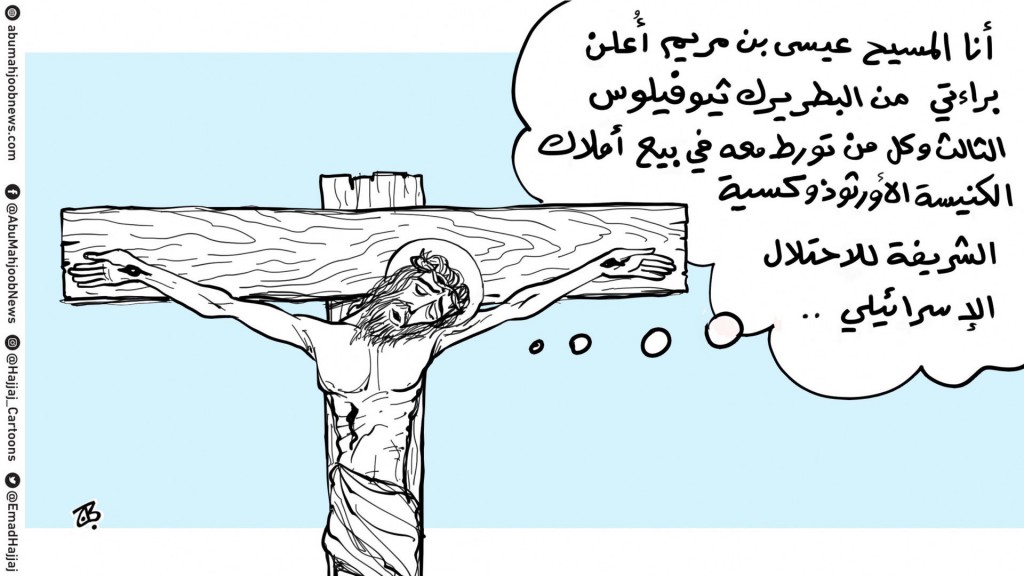 Jordanian cartoonist Emad Hajjaj is under investigation for “insulting religion” and “inciting sectarian strife” after a private citizen filed a complaint over a cartoon that shows the crucified Jesus denouncing the leader of the Greek Orthodox Church in Jerusalem. The cartoon is in response to recent news that the Church has sold land to Israeli developers.

Both Hajjaj and the complainant were called in to testify before the general prosecutor of Amman this week. The cartoonist was not detained, but if convicted he could face up to three years in prison. He deleted the cartoon from his Facebook page after receiving death threats evoking the assassination last year of Nahed Hattar, an atheist writer who was shot outside the courthouse on the first day of his trial for sharing–but not creating–a cartoon on social media.

Hajjaj is one of the best-known cartoonists in Jordan. In his cartoon shown here, the dying Jesus says, “I am Christ the son of Mary and I disown Patriarch Theophilos III and all of those who were involved with him in selling the noble Greek Orthodox Church to the Israeli occupation.”

The cartoon has drawn protests both from Jordanian Christians and from some Muslims, who object to the depiction of any prophet of Islam and to the suggestion that Jesus was crucified, which is not a tenet of their faith. After deleting the cartoon from Facebook, Hajjaj apologized and said it had been misunderstood. The ordeal has shaken his commitment to his work, he told The National:

I’ve been drawing cartoons for 25 years and I have a noble message as an artist. But I started questioning things in the past two days…anyone can take me to court, people are threatening me for work I have published. The case was blown out of proportion. Unfortunately the sensitivities concerning the political atmosphere and terrorism have exposed that there are extremists in other denominations.

According to Hajjaj’s lawyer, the general prosecutor has not yet decided if the case warrants proceeding to trial.