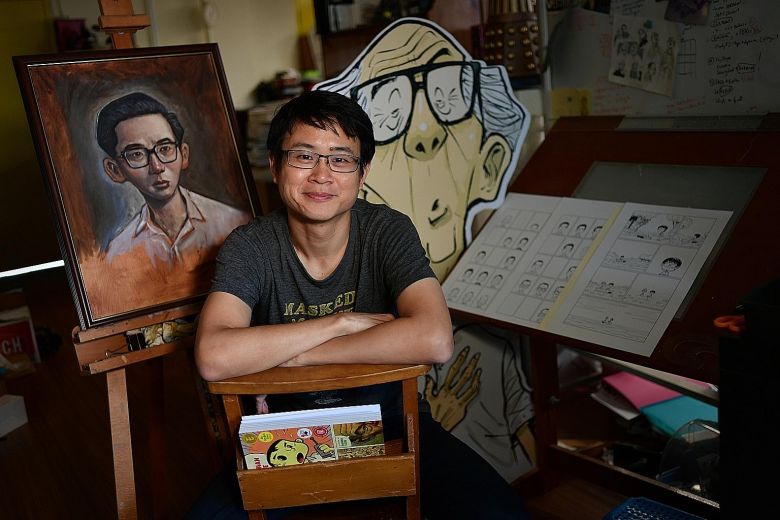 Sonny Liew, the triple Eisner Award-winning creator of The Art of Charlie Chan Hock Chye, is wrapping up a banner year with yet another honor back home in Singapore. Along with nine other impressive residents of the city-state, Liew is nominated for the Straits-Times newspaper’s Singaporean of the Year Award.

The Art of Charlie Chan Hock Chye chronicles Singapore’s turbulent history in the latter half of the 20th century through the life of the fictional title cartoonist. Liew adopts various narrative “voices” by using different artistic styles and incorporates realia such as photographs and news clippings to bring Charlie to life, often contradicting the upbeat official narrative of the city-state’s formative years. Just before publication in 2015, the government-funded National Arts Council (NAC) revoked a previously awarded grant of about $6000 USD, with an official explaining that the book’s “sensitive content, depicted in visuals and text, did not meet our funding conditions.”

The tide has turned somewhat following Liew’s international recognition; NAC even offered him tentative congratulations for the Eisner wins on Facebook, without mentioning the title of the book. Liew himself did return an even larger grant from the same body this year, after it became clear that NAC still expected to have some measure of creative control over his work.

This is the third edition of the Singaporean of the Year Award from the Straits-Times, Singapore’s largest newspaper. Seeking to honor “extraordinary acts of goodwill, ingenuity or perseverance by Singaporeans who have made a positive impact,” the award bestows about $14,900 USD on the titleholder and about $3700 for the nine runners-up. The winner will be announced on February 6, 2018. Congrats to Sonny Liew once again!

If you haven’t read The Art of Charlie Chan Hock Chye, we have copies signed and sketched by Liew himself in our Rewards Zone! Proceeds support our important First Amendment work! Get yours here.

See our previous coverage of Sonny Liew and The Art of Charlie Chan Hock Chye: