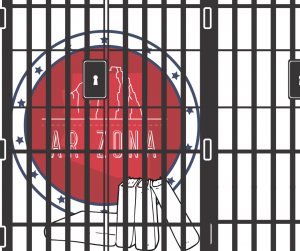 Last week the ACLU wrote a letter to the Arizona Department of Corrections (ADC) asking them to overturn their ban on Chokehold by Paul Butler, a book that examines the racial disparities of the prison system and advocates abolition of mass incarceration. The letter, which was exclusively released to The Root, explains that ADC policies about restricting reading material are supposed to be reserved for books that present potential danger to prisons, not for books that disagree with the philosophy of the department.

From the ACLU letter,

The very people who experience extreme racial disparity in incarceration cannot be prohibited from reading a book whose purpose is to examine and educate about that disparity. Improving understanding of policing, incarceration, and racial bias is especially critical given Arizona’s stark racial disparities and overall high rates of incarceration.”

Paul Butler is a former D.C. Prosector, but Chokehold was born out of his experiences on the other side of the criminal justice world, after he was arrested and tried on false assault charges. Despite being caught up previously in a culture of harsh prison sentences and strict punishment as a prosecutor, he experienced first hand many elements of the judicial system that were designed to further oppression, and act as a metaphorical chokehold to men of color in America.

Emerson Sykes, one of the co-authors of the letter from the ACLU, told The Root that the ban defies current Supreme Court First Amendment precedent, which guarantees the right to read to participate in the marketplace of ideas, including books like Chokehold or Michelle Alexander’s The New Jim Crown, and restrictions from this right are desired to remove books that present real danger to the prisons, like books about making bombs or books that advocate violence. According to the letter, “ADC cannot show that banning Chokehold is reasonably related to legitimate penological interests and should immediately correct its decision and restore access to Paul Butler’s important book.”

This book ban is just one of many recent attempt all across the country to reduce access to inmates tools to self-education, by banning book donation programs, and access to a multitude of books and comics. Prisoner advocates universally agree that infringing on inmates right to read, is not only unconstitutional, but also actively impedes the goal of reducing recidivism, which education has demonstrated to be the most effective tool.

“If rehabilitation is taken seriously and preparation for a life after prison is taken seriously, then prison officials have every interest in promoting education among those who are trying to understand how they got to where they are, and how to make sure they don’t come back,” Sykes said.

Want to donate your old graphic novels to incarcerated individuals? Read about book donation programs and find one near you with CBLDF’s list of organizations broken down by state.

← CBLDF Stands Up For Pride!
Pennsylvania School Board Stands Up for Curious Incident →